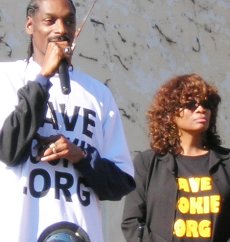 A Save the Peacemaker Rally with Snoop Dogg was held on Saturday, November 19th from 10am to 12pm at San Quentin in Marin. Hundreds of people attended. Speakers included rapper Snoop Dog, Fred Hampton Jr., representatives of the Nation of Islam, religious forces, and grassroots anti-death penalty activists from across the California.

Enemy Combatant Radio provided a live broadcast of the rally.

Stanley "Tookie" Williams has been sentenced by the state to die on Tuesday, December 13th at San Quentin State Prison. He has been nominated several times for Nobel Prizes in Peace & Literature -- for his anti-violence, anti-gang work and nearly a dozen intervention books about gang life. The film "Redemption" stars Jamie Foxx as Mr. Williams. Supporters of Williams are asking people to write letters to the governor to request that he grant clemency and save Stanley "Tookie" Williams' life.

"Stop the Execution" PSA and Statement from Tookie

Wednesday, November 30th will be "Cities Against the Death Penalty and Global Day of Action" in which over 100 cities will illuminate a symbolic monument as a demonstration of their opposition to the death penalty. More upcoming anti-death penalty events will include a December 4th screening of "Redemption: The Stan Tookie Williams Story" hosted by Danny Glover at the Victoria Theater in San Francisco.