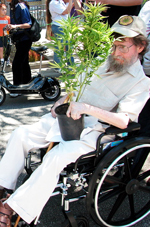 A San Francisco Rally for Rescheduling Marijuana was held on Wednesday, October 26th. It took place outside of Health and Human Services, 50 United Nations Plaza. Southern California Americans for Safe Access chartered a bus from San Diego with stops in Santa Ana, the San Fernando Valley, and Santa Barbara on the way to the rally.

On October 18th, Supervisor Ross Mirkarimi's bill regulating Medical Cannabis Dispensaries (MCD's) was debated before the San Francisco Board of Supervisors. For three hours, various supervisors, including Maxwell, Alioto-Pier, Daly passed hostile amendments gutting the bill with zoning requirements which could effectively shut all or most dispensaries in the City (Supervisor Chris Daly won an amendment that adds large portions of South of Market as a no-medical cannabis dispensary zone). Daly did plan to introduce an amendment that would "grandfather in" all existing SOMA dispensaries. Supervisor Daly's blog entry
The bill was continued over to this week's hearing, which was held on Tuesday, October 25th, 2005. This may have been the final vote on regulation of dispensing collectives in San Francisco. Medical marijuana advocates are encouraging people to voice their displeasure over this process and to show support for the City's MCDs. Organizations are also encouraged to write letters or make phone calls to the Board of Supervisors.
Read More On Indybay's Drug War Page