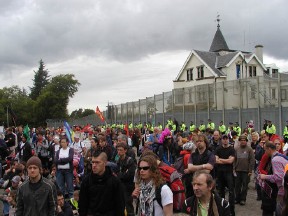 Several Indybay reporters and Bay Area activists are reporting from the G8 protest in Scotland this week.

On 7/8, a street party was held on a bridge in Glasgow to celebrate the end of the G8 summit and protest the expansion of the M74 motorway. People who live in the areas that would be affected by an M74 extension have said that the expansion would increase air and noise pollution, contribute to climate change, worsen traffic, expose contaminated land, and split the local community. Photos And Reports: 1 | 2 | 3 | 4

After the bombings in London the morning of 7/7, a Vigil Against War and Bombings was held in Edinburgh. (Photos: 1 | 2) Also, activists were gearing up for a demonstration on July 8th in support of Maryam Rajavi, a fighter in the Iranian Resistance Movement, who has come under heavy repression in France. (Audio)

On 7/6, protesters arrived by bus at Gleneagles, the site of the G8 Summit. Police attempted to dissuade people from going, by telling them the march had been cancelled. Eventually, the buses arrived at Gleneagles and people marched to the fence and tore it down. Those unable to get to Gleneagles marched in Edinburgh. Reports: Gleaneagles | Edinburgh || Photos & Videos: 1 | 2 | 3 || Audio: 1 | 2

On 7/5, about 1000 people demonstrated at the Dungavel Detention Centre, to demand equal rights and free movement for all, and for an end to detention and deportation.
Audio || Photos || Read "The Story So Far"