by Rafael
Last Sunday, the Zapatista Army of National Liberation has put her regular army and her militia on red alert. Dozens of members of autonomous regional zapatista governments, the Councils of Good Government, fled to the mountains of Chiapas, Mexico’s southernmost state. From now on they work in a clandestine and nomadic manner. The offices of the autonomous municipalities and regions have been closed. Members of civil society who are in Chiapas right now are urged to leave rebelious territory, or stay at their own risk. The motivations for the red alert are unknown right now. It is very likely that the shooting war, that cost hundreds of lives in january of 1994, will be resumed. 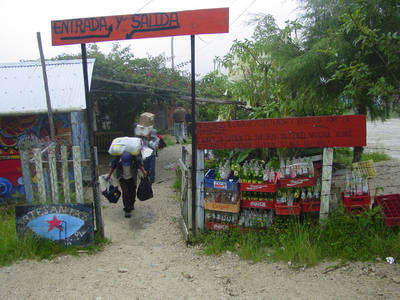 INTRODUCING THE ZAPATISTAS
After a short shooting war in january of 1994, the Zapatistas fought, in a non-violent but sometimes spectacular fashion, for democracy, freedom, justice, ethnic minority rights, women’s rights, gay and lesbian rights, rights for transvestites, rights for transsexuals and the protection of the rain forest. For “a world in which all worlds can fit”. After long negotiations between the zapatista rebels and the federal government, a treaty of one of many zapatista demands, indigenous rights, was signed. The Zapatistas mobilised millions of people in Mexico and around the world in support of this treaty. However, the law that was passed in the Mexican parliament in august of 2001 was a completely altered version of the treaty. The Zapatistas felt betrayed and entered, once more, a period of silence. Periods of silence traditionally follow periods of public appearance of the Zapatistas. In these periods of silence they built the strength of their organisation and deliberate on their next strategic moves.

In silence the Zapatistas strengthened their autonomous organizations according to the agreements of the treaty that later was watered down by the government. By now there are approximately some hundreds of thousands of (mostly indigenous) zapatista support bases who are organized in thousands of autonomous rebel communities, some thirty autonomous municipalities and five overarching regions, who each have their representative councils. In these regions they built and organised, with financial aid of many NGO’s and private donators, hundreds of autonomous primary schools (for children who otherwise would not have acces to any form of education, most of the indigenous of Chiapas are illiterate), a couple of secondary schools, autonomous commercial cooperations, dozens of microclinics, a few larger hospitals, a few media collectives to, a few rebel radio stations and they trained many health promoters in an area where 55% of the people suffer from malnutrition and one in every foru infants dies of curable diseases like chronic diarrhea. But the most remarkable achievement of the movement is the creation of an highly developed, multi-level autonomous government.

The Mexican political system for decades has been characterized by widespread clientelism, in which local political bosses, caciques, are supported by national, dinosaur-like, parties and can do whatever they want in their territories, as long as they ensure support for this party throughout their territory. They traditionally use these powers for their own good and that of their allies. However, in the autonomous territories “the people command and the government obeys”. All major decisions in the communities are made after extensive deliberations in which all members have had the opportunity to speak. The translocal decisions are made by the communities. There is no such thing as a supralocal government. The elected Zapatista officials have to obey thes orders. When they use their position to do anything else than execute the instructions of the people, they will be removed from their positions. The Zapatistas have no illusions about the corrupting influence of power, nor should they after decades of caciquismo. The Zapatistas reject the notion of the necessity of a professional political class. They think the leadership will eventually act in its own interest, and not in that of the people. As a simbol, administrative officials all hide their faces behind ski masks or scars. This emphasizes the the unimportance of the leader as a person. He or she has to get the job done, and if they mess up, they are immediately replaced.

RED ALERT
In may of 2005 the Zapatistas released a communiquee in which they announced to send a delegation to Europe. Their spokesman, “Subcomandante Marcos” ended with a post scriptum:

"P.S. in the tone and volume of a sports announcer – The Sup, using the tactics of the Uruguayan Obdulio Varela in the final against Brazil (World Cup, Maracaná Stadium, Rio de Janeiro, 7/16/1950), ball in hand, having traveled as if in slow motion (since May of 2001), from the zapatista goalpost. After complaining to the referee about the illegitimacy of the goal, he puts the ball in the center of the field. He turns around to look at his compañeros and they exchange glances and silences. With the scorecard, the bets and the entire system against them, NO ONE has any hope for the zapatistas. It starts to rain. A watch reads almost 6. Everything appears ready for the game to resume…"

And the game resumed last Sunday. Today on Tuesday, when I’m writing this article, it is still unclear what prompted the red alert. There are a few possible explanations:

- A peaceful solution to the conflict seemed impossible to the Zapatistas. The Zapatista support bases have decided to restart the shooting war to achieve their objectives. This explanation seems highly unlikely to me. The past ten years the Zapatistas moved away from armed struggle to achieve their goals. Furthermore, they lack the military capabilty to confront the Mexican federal army in a full-out war.

- The Zapatistas have been alarmed by troop movements of the federal army. They foresee a possible attack and prepare to defend themselves. According to spokespersons of the Mexican government there have been no troop movements that can be explained as such. Moreover, the Zapatista spokesperson wrote ended the communiquee of last Sunday with: “Vale. Health, and pay attention, because down below the watch reads six”. This might mean that back in may the Zapatistas already knew they were preparing for this red alert”.

- The Zapatistas fear an attack by a paramilitary organisation. The pas eleven and a half years, hundreds of civil Zapatistas and members of the civil society have been assassinated by forces that were trained, armed and directed by the federal army and the political parties. Although the murderers and the intellectual authors of these murders were rarely prosecuted and convicted, the Zapatisata have never retaliated these crimes. They denounced the murders by the official government and waited for justice.

- A fourth possible reason is to my opinion the most probable. About six months ago a communiquee was released in which the Mexican justice department was urged to arrest and trial the murderers of unarmed civilians in Chiapas and end the impunity that had reigned Chiapas for eleven years. They warned the government that if justice would not be achieved, the zapatistas, after turning the other cheek for 11 years, would arrest and trial these murderers themselves. It is very likely that they are about to do just that. And they expect retaliation by the paramilitaries and the army who are intimately connected.

Last Sunday, “the EZLN release[d] from responsibility for any of our future actions all persons and civil, political, cultural, citizens and non-governmental organizations, solidarity committees and support groups who have been close to us since 1994. We thank all of those who have, sincerely and honestly, throughout these almost 12 years, supported the civil and peaceful struggle of the zapatista indigenous for the constitutional recognition of indigenous rights and culture”. Also “basic community health services will continue functioning in the different Caracoles. Civilians will be in charge of these services, and the CCRI-CG of the EZLN is distancing them from any of our future actions, and we are demanding that they be treated as civilians and with respect for their life, liberty and goods by government forces”. And “the EZLN announced the closing of the Zapatista Information Centre (CIZ), not without first thanking the civil societies who have participated in it, from the time of its creation until today. The CCRI-CG of the EZLN formally releases these persons from any responsibility for the future actions of the EZLN”.

Since 1994, many social (non-violent) activists were targeted by the army and the paramilitaries because the Zapatistas were well protecten. Dozens of villages, from which the villagers had fled, were raided an plundered by the federal military and many houses were boobytrapped in case the people returned to their homes. At this moment, seven thousand displaced persons live in refugee camps because they can not go home. Right now the Zapatistas want to distance themselves from the civilians to make clear that these people are not responsible for what will happen in the near future.

LINKS:
The communiquee, dated june 19th, in which the red alert is declared (in English):
http://chiapas.indymedia.org/display.php3?article_id=113783

The communiquee, dated may 25th, which announces the journey to Italy:
http://chiapas.indymedia.org/display.php3?article_id=113483

Sites on which you can find updates about the situation in English:
http://Chiapas.indymedia.org
http://www.eco.utexas.edu/~archive/chiapas95/2005.06/
http://www.narconews.com/ (I expect them to publish an article shortly)

Related Categories: Americas | International
Add Your Comments
Support Independent Media
We are 100% volunteer and depend on your participation to sustain our efforts!