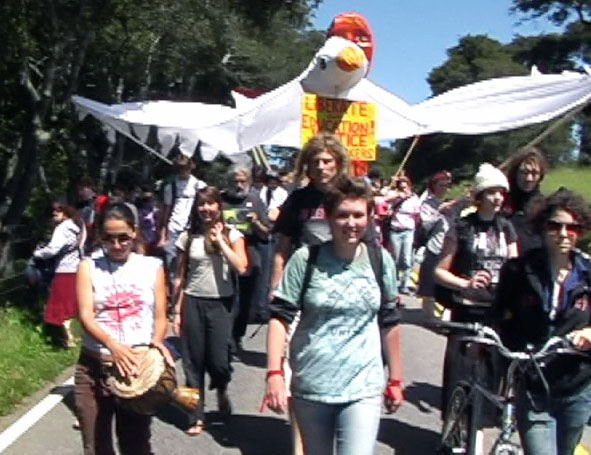 This film includes scenes of the festive march from the Baytree Plaza down to the base of campus where Tent University Santa Cruz was established.

We also hear a poem from Fritz called, "The Revolution will not be Taught."

The rest of the video is very dark because it was night and unfortunately, I don't have have a light for my camera.


UC Cop #1 to the person outside the circle:

"If you don't leave, you're going to be arrested."


Person outside the circle responds:


UC Cop #1 replies to the person outside the circle:

"We already gave the order to disperse."


The person who was simply standing outside the circle of police was then tackled to the ground by several police and taken into custody.

Someone being taken into custody makes a request to have his "rights" read to him:

"I wanna know my rights."


A UC cop denied the requested and stated:

"You're not being questioned."

Paul Carroll, a student at UCSC and a participant in TUSC, gives an interview about the police misconduct that he experienced. A cop grabbed Paul and threw him and his video camera backwards into the air and onto the ground. Paul was also stuck in the ribs three times with a baton and punched in the face by a cop.

Some of the many reasons for TUSC include the UC's skewed budget priorities, outreach being cut, rising tuition and military funding with UC money.

To the surprise of most people present, the cops decided to leave after arresting almost 20 people. The police were not able to arrest all the people they wanted to.

As the story goes....., "Suddenly, the Cops Ran Away and the People Rejoiced!"

Suddenly, the Cops Ran Away and the People Rejoiced!
http://santacruz.indymedia.org/feature/display/17083/index.php

This video linked below, made by Martin and Andres, has much better lighting and does a very good job of exposing the violent tactics used by the police at the behest of the University Administration.

Here is the same article (video) posted on SC-IMC.