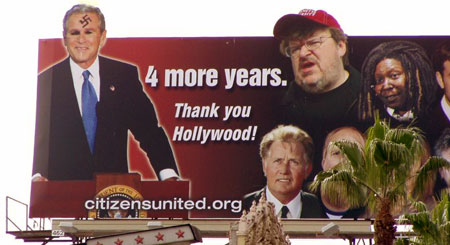 As planned, the signs were created, coinciding with the buildup to Oscar night. However, one of those tongue-in-cheek billboards was seriously vandalized Wednesday night, when a Swastika was painted on President Bush's forehead.

Few Angeleans saw the disfigured sign though, since Citizens United anticipated the vandalism, and had previously arranged with the sign company that their billboards would be immediately repaired if, in fact, they were damaged.

True to their word, the overnight damage was repaired within hours.

http://www.humaneventsonline.com/article.p...
Add Your Comments
Support Independent Media
We are 100% volunteer and depend on your participation to sustain our efforts!