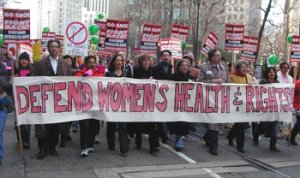 1/22/2005: The San Francisco Board of Supervisors declared that January 22nd, 2005 was "Stand Up for Choice Day" in advance of today's protests. About five thousand people gathered this morning for a Roe v. Wade Anniversary Demonstration that included a rally with speakers on Market Street and a march to the location of an anti-choice rally. After the march, participants lined the Embarcadero as the "pro-lifers" paraded towards the Fisherman's Wharf tourist district. The route of the parade was stopped twice by pro-choice protesters. Police kept the women's rights advocates out of the street as much as possible, divided them up on the sidewalks, and escorted the anti-choice march through Fort Mason, down Marina, to the park area where a post-march anti-choice "Information Faire" was to be held. The pro-choice march was eventually allowed through Fort Mason and headed to the Marina Green.

Breaking news from the march and action in San Francisco

Read more about the Walk for Life and events in SF to commemorate the 32nd anniversary of Roe v. Wade, on Indybay's Women's News Page