Add an Event
Newswire
Calendar
Features
Home
Donate
From the Open-Publishing Calendar
From the Open-Publishing Newswire
Indybay Feature
Publish to Newswire
Add an Event
Related Categories: Environment & Forest Defense | Health, Housing & Public Services | Racial Justice
Hunters Point residents say it's sickening their kids
by Charlie Goodyear from the Chronicle (jessica [at] greenaction.org)
Tuesday Dec 14th, 2004 4:30 PM
A group of residents and environmental activists shut down the main gate of a power plant in Hunters Point on Wednesday to protest pollution they say is sickening neighborhood children and years of what they consider broken promises to close the facility. 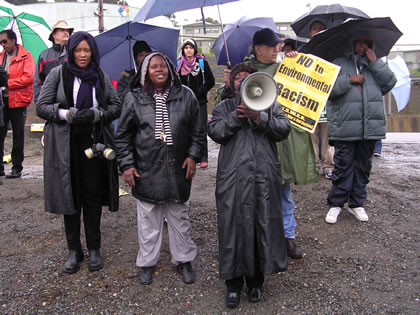 A group of residents and environmental activists shut down the main gate of a power plant in Hunters Point on Wednesday to protest pollution they say is sickening neighborhood children and years of what they consider broken promises to close the facility.

Braving a strong cold rain, the protesters called on the plant's owner, Pacific Gas & Electric Co., to close the power station next year, criticizing a recently announced agreement that would shut the plant by the end of 2006.

" This plant is a destroyer of our lives and our well being,'' said Marie Harrison, a member of the Hunters View Tenants Association. "You can't just keep overlooking the people. This plant could have been shut down three years ago, and the lights would not have gone out.''

San Francisco and state officials are working on a plan to close the PG&E plant and a facility owned by Mirant Corp. on the city's central waterfront east of Potrero Hill. But state authorities want to ensure that if the plants are shut down, the power they produce will be replaced through new sources of energy and upgrades.

" It's city policy to close these plants as soon as possible,'' said Tony Winnicker, spokesman for the San Francisco Public Utilities Commission. "We sympathize with and understand the residents' frustration.''

PG&E spokesman Paul Moreno said the company was waiting for approval from the state to close the plant. The plant subject to a host of state, federal and city environmental regulations, he said.

Residents say they and their children suffer higher rates of asthma and other illnesses because of air pollution from the PG&E plant. About 70 people demonstrated at the plant entrance, with 11 of them sitting in front of the gate as a small group of police officers kept watch.

Resident Tessie Esther said her granddaughter suffered from severe asthma and frequently was treated at a local hospital.

" I know it's the plant,'' she said. "Over 50 percent of our children have asthma. This plant is killing us in the community. Every day, these kids are getting sicker and sicker.''

Federal and local studies indicate that one of out six children in the Bayview-Hunters Point district suffers from asthma. The surveys blame pollution, poor housing, lack of quality medical care and poverty for the raised rate of illness.

Supervisor-elect Ross Mirkarimi made an appearance to show his support

http://www.greenaction.org/hunterspoint/pr...
Add Your Comments
Support Independent Media
We are 100% volunteer and depend on your participation to sustain our efforts!