Add an Event
Newswire
Calendar
Features
Home
Donate
From the Open-Publishing Calendar
From the Open-Publishing Newswire
Indybay Feature
Publish to Newswire
Add an Event
Related Categories: California | Anti-War
How must a mother feel ?
by no mercy
Saturday Nov 27th, 2004 12:59 PM
A mother deprived to recognize his returned son.
How must a father feel whose son died on a dirty dishonest policy? 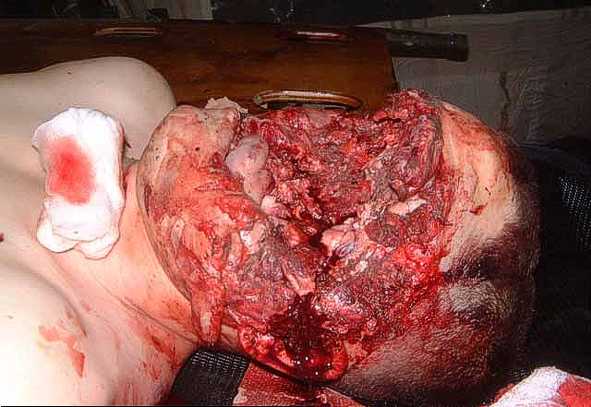 How must parents feel whose sons returned as cripple due to a couple of utterly ruthless profiteers.
Thousands of parents lives sink to dolor, eroded by rage, agony and black despair. A lot of these parents have nothing more to loose, they have lost everything. They lost their children senseless sent to death by merciless robber and murderer.

Publicized on Thursday November 11, 2004 by The Guardian a British father whose sons were driven to death said it clear in public. The father of two Black Watch soldiers serving at Camp Dogwood in Iraq threatened to kill the defence secretary, Geoff Hoon, because he was a "two-faced lying git". James Buchanan, whose sons Gary, 27, and Craig, 24, both corporals, were due to return home but then redeployed north to reinforce the American assault on Falluja, said:

Any, forsooth any raids, covered as wars for freedom, instigated by a greedy elitist upper class would be prevented sustainable. All these political criminals would think twice before they make the common people to robber and murderer for profit. These fathers would prevent the killing of further thousands of common american people sent to staged and futile wars and made to slayers by a down-and-dirty upper class. For the world and also for most Americans these fathers deprived of their sons would be memorable tragic heroes saving ten thousands of lives.

So we call you, why you're waiting for! Any day dozens of your sons perish as cannon fodder and hundreds of Iraqis get murdered for a simple regime change. Stand up and take your sniper guns. You have nothing to loose!
http://www.strike-free.net
§murderer_gang
by no mercy Saturday Nov 27th, 2004 12:59 PM

http://www.strike-free.net
Add Your Comments
Support Independent Media
We are 100% volunteer and depend on your participation to sustain our efforts!