Add an Event
Newswire
Calendar
Features
Home
Donate
From the Open-Publishing Calendar
From the Open-Publishing Newswire
Indybay Feature
Publish to Newswire
Add an Event
Related Categories: Santa Cruz Indymedia | South Bay | Education & Student Activism
March for Education, Sept. 15-22 - San Jose to Berkeley to SF
by from santa cruz imc
Thursday Sep 16th, 2004 12:10 AM
Over two dozen Bay Area students and youth will walk from San Jose State University to UC Berkeley to San Francisco State University from Sept. 15-22 to dramatize their concern for the future of education in California. Along the way, they will visit a total of 17 different California State Universities, community colleges, and private colleges, to dialogue with the students, faculty, staff, and community members at those campuses and build a person-by-person understanding of the myriad ways the state’s failed budget priorities are impacting its citizens.
<p>
The walk will conclude with a special appearance at the UC Regents meeting in San Francisco on September 22. The long-term vision of the "Education Rising" campaign is the creation of a "union" for students. This union, based on a structure of deep participatory democracy, will serve as a political voice for all those who care about education and youth rights. 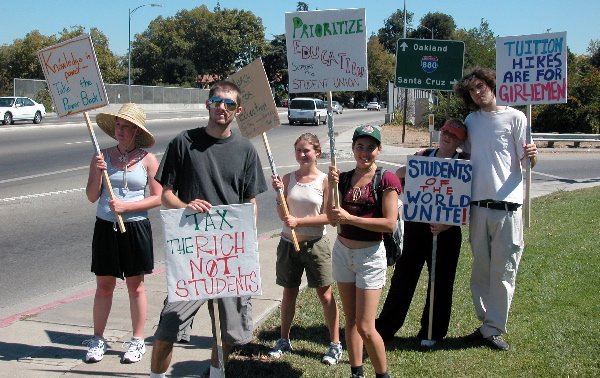 Audio Interview and Photos from the March for Education

WHAT: "Education Rising" - March for the Future of California
WHEN: September 15-22
WHERE: San Jose to Berkeley to San Francisco

GET UP, STAND UP… AND WALK TO BERKELEY! MARCH FOR EDUCATION AND YOUTH RIGHTS!

From September 15-22, a group of students and community members will walk from San Jose to UC Berkeley to dramatize our concern for the future of education and youth rights in California. We believe our state should value the welfare of its citizens and make the future of the state (i.e., its youth) a top priority. Our hope is to collaborate with our sisters and brothers throughout the state in the struggle to claim the basic rights and opportunities society promised us.

Along the way, we will visit as many community, state, and private colleges as possible, to dialogue with our fellow Californians and build a person-by-person comprehensive understanding of how the state's skewed political priorities are impacting its citizens.

The walk will conclude with a special appearance at the UC Regents meeting in San Francisco on September 22. The long-term vision of the "Education Rising" campaign is the creation of a "union" for students. This union, based on a structure of deep participatory democracy, will serve as a political voice for all those who care about education and youth rights.

The bulk of the time on the walk, we will dialogue with students and other state residents, to learn their struggles and hopes, gather their thoughts on the direction of the state, and join them to formulate ideas and tactics for how to secure a better future than the one the state’s powerbrokers have set aside for us. To facilitate these aims, we will conduct meetings with student leaders at every campus we visit, bring hundreds of surveys for people to fill out, and perform chants, rallies, and songs to vocalize our message at every point on the trek.

***RALLY AT SPROUL PLAZA – SEPT. 21, 4:00 P.M.***
Upon arriving in Berkeley, we will mark the walk’s culmination by gathering at Sproul Plaza, the historic celebratory hub of numerous past student movements. In addition to music and spoken word performances, the program will include speeches by various inspiring activists, student leaders, and walk participants.

***UC REGENTS MEETING – SEPT. 22***
On the final day of the walk, we will amass at the UC Regents meeting at Laurel Heights in San Francisco, where we will use the public comment period to speak our vision of what a more just, democratic, and empowering future would look like.

***LODGING***
We are in the process of securing sleeping space for each night of the walk. Thus far, we have reserved a co-op at Stanford University for Sept. 16 and, of course, Lake Chabot Campsite for Sept. 17-19.

***FOOD ARRANGEMENTS***
We are receiving large food donations from local Santa Cruz markets including the Staff of Life, New Leaf Market, and the Food Bin. Many vegan options to be provided.

***EDUCATION RISING WEEKEND RETREAT***
We will rest our bodies and renew our spirits at the Hayward/Castro Valley Lake Chabot campsite from Sept. 17-19. If you are not attending the walk but would like to take part, contact us ASAP at future@riseup.net to reserve space.

***WHAT TO BRING***
Musical instruments: The communal vibe that will carry forward the walk will also animate numerous night-time jam sessions, drum circles, games, and team-building activities. Bring musical instruments so that they can be transported in the car to our nightly rest spots.
Money: Bring a fair amount of money (at least $20) just in case we encounter unforeseen food shortages or other hitches in our plans.
Camping gear: Sleeping bag, sleeping pad, tent, flashlight.

***BACKGROUND***
In May, nearly two dozen UC Santa Cruz students conducted a 50-mile, three-day walk from Santa Clara to San Francisco to support legislation to create a U.S. Department of Peace. The walk concluded with a face-to-face meeting between the walkers and aides for Rep. Nancy Pelosi (D-CA), U.S. House minority leader.

The walk received considerable TV and radio coverage, including segments on KTVU Channel 2 and KPFA radio, as well as the following print media features:

Upon returning to Santa Cruz, we decided to direct our energies toward an issue strongly related to peace but one perhaps even closer to home: the state's mythical "budget crisis" and its effect on education and services designed to benefit youth. Our vision is to unite all California youth to assert a powerful collective voice in the state political process.

***CURRENT EDUCATION RISING PLATFORM***
Raise Taxes on the Rich, Not Students! Tuition and fee increases are essentially a massive tax increase on a very specific segment of the population -- students and their families. Meanwhile, the tax rate paid by the city's richest denizens has reached all-time lows. But according to a recent LA Times poll, 69 percent of Californians favor restoring the income tax rate on the wealthiest one percent of citizens to 1998 levels, which would raise $3 billion in rightful education funding.
Education Not Incarceration! Largely because of the state’s harsh drug sentencing laws, general fund spending on colleges in California has dropped by $1 billion since 1985, while prison spending has increased by $3 billion. It's time to close down the prison-industrial complex and reinvest in our crumbling schools.
End the Repression of Youth! Not only have many California public schools become direct pipelines to prison, but many of these schools essentially are prisons, complete with constant repressive surveillance of students and daily frisks by armed security guards. In addition, absurd curfew laws have abounded in recent years, and state propositions 209, 196, and 187, all passed in the last decade, represent gross violations of youth civil liberties.

***CONTACT US***
If you would like to participate in the walk (all or a portion of it) or would like to offer any other form of support, please Email us at future@riseup.net or call Education Rising at (831) 454-0829.

I met up with the marchers on Wednesday afternoon while they were en-route from San Jose State University to Santa Clara University. Stephanie Smith, one of the organizers of the March for Education spoke with me about the effects of funding cuts and tuition hikes at all levels of education, as well as marching as a tactic for social change.
http://santacruz.indymedia.org/newswire/di...
Add Your Comments