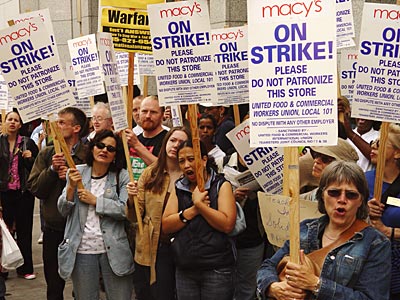 San Francisco - Hundreds of Macy's workers went on a one-day strike on Saturday, marching and chanting "Don't Shop Macy's" in front of all entrances to the two Macy's stores on Union Square. The strike was organized by employees in conjunction with the union that represents them, United Food and Commercial Workers Local 101.

Macy's employees currently receive no sick days, pay $350 to $500 a month for family healthcare coverage and are being offered a year-end bonus instead of a raise. The union is fighting for five sick days a year, a cap on healthcare coverage, and raises instead of a year-end bonus. Additionally, workers don't don't want to be forced to sell customers Macy's credit cards (which carry a 24.9% APR) under the threat of discipline.

In regard to sick days, Steve Quinlan, one of the shop stewards in the Macy's Men's Building, discussed the current system, "If you're a new hire and you get sick, if you can stay out four days, then, you get paid on the fifth sick day. I don't know any people who can take four days off without pay. The fifth sick day is at two-thirds of your regular salary." He added, "we have a point system. Any time you're sick or late it's a point and if you have 12 points you're fired." Even as a ten-year employee (the last five years consecutively), Quinlan stated that if he was sick he wouldn't be paid until the fourth day and the first three days would be unpaid.

Jason Blalock, a mobilizer for UFCW Local 101, said that, "it also means that customers are coming into the store, not knowing there are workers in there who can't afford to stay home for the day and lose their pay. Employees come to work sick and customers are ending up getting sick from this. We're asking for five paid sick days a year."

Everybody's health care is high these days," acknowledged Blalock, "but Macy's employees are paying upwards of 80% of their healthcare premium. Right now we don't have any caps or controls over what healthcare costs are - copays, and eligibility and premiums. All we want on healthcare is to cap the costs where they are now.

Workers are also fighting for actual raises instead of a year-end bonus. Macy's is offering a thirty cents an hour bonus for every hour worked, payable upon completion of the calendar year. Last year, employees received a 45 cent raise and they question why Macy's would think they would take a thirty cent bonus. "They're playing hard ball and we want to show them that we're not going to take it," said Quinlan.

Jason Blalock talked about the other big issue, the Macy's card. "A 24.9% interest rate is a very high interest rate for any card. The card is issued by FDS Bank." Federated Department Stores operates both FDS Bank and Macy's, as well as other nationwide department stores including Bloomingdales. "So, all the money goes back into the same pot. Basically Macy's is like a huge credit operation now, run by Federated Bank.

"We're opposed to the fact that they push workers to sell this credit card every day," said Jason. A UCFW Local 101 information sheet states that "Macy's sales associates are constantly pressured to offer a Macy's credit card every time a sale is made...and that some associates object to having to push these cards on customers, especially younger shoppers."

"Employees only get $2 for convincing a customer to open one of these credit cards and the customer gets 10-15% off of their purchase - which ends up coming out of the worker's commission. So most employees are actually losing money when they open these credit cards. And now, if you don't sell shoppers on these credit cards, Macy's wants to discipline you. We've never had discipline for that and the company's trying to implement it."

At noon on Saturday, six people, including UCFW Local 101 President Mike Borstel and Father Louis Vitale, pastor of St. Boniface in the Tenderloin District, sat down arm in arm in front of the doors facing Union Square and were promptly arrested. According to Father Vitale,"they were taken to the central police station and given release slips. We were out on the street waiting for a ride and an officer came out again and said 'there's a change in plans'. He took us back in and said the commander wanted us cited and now we have to go to court. I'm sure it was undoubtedly the Macy's people putting pressure on them."

Jason Blalock added that, "Kevin Sears, the Director of Employee and Labor Relations called down to the police station and is intending to press charges to the fullest extent."

Read more about the negotiations on the UFCW Local 101 website

You can tell Macy's management what you think by calling or emailing:

David Hanks is a freelance photographer who has covered hundreds of protests during the last five years. 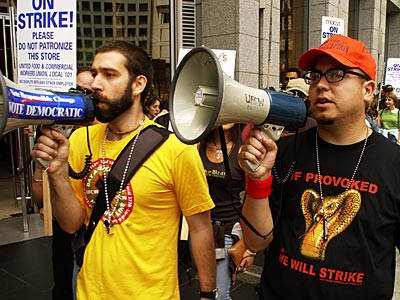 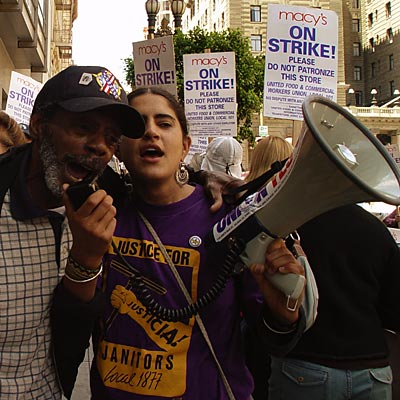 Ronald Rodgers and Lorena Melgarejo of SEIU Local 1877 (Justice for Janitors) also joined the protest. "We're out here on behalf of the workers and letting them know we're behind them," said Ronald. Lorena added,"Any time workers strike, all the unions need to support them. It's a struggle not only for them but for everybody. Our janitors actually clean this building and they didn't cross the picket line."
http://www.davidhanks.org
§Ready for Arrest
by David Hanks (photos [at] davidhanks.org) Sunday Jul 18th, 2004 12:47 PM 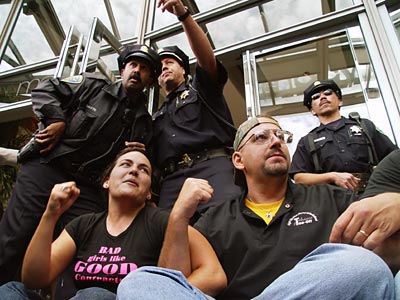 http://www.davidhanks.org
Add Your Comments
LATEST COMMENTS ABOUT THIS ARTICLE
Listed below are the latest comments about this post.
These comments are submitted anonymously by website visitors.