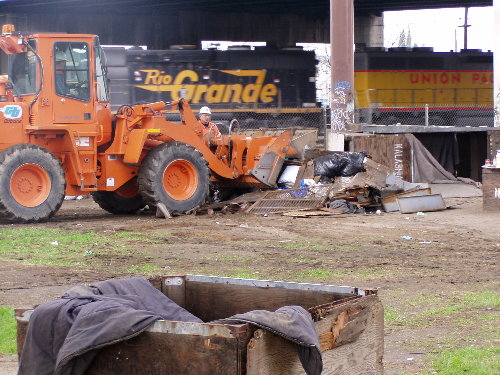 There is another story about homelessness that didn’t get told in the previous story (see: http://sf.indymedia.org/news/2004/02/1675751.php ). While Nick DeGraff, Dallas Blanchard, and I were taking pictures of the destruction of the homeless community on Santa Clara street on Wednesday, February 4, there was another attack on the homeless taking place that almost nobody knew about. The Fresno Bee didn’t report on it and it wasn’t on the TV news.

The encampment was on the other side of the railroad tracks on H street inhabited by about 50 people. They had built their community out of wood crates, the area was clean, and there were no reports of violence or criminal activity. It was a model homeless community that provided safety and security for its members. Erick Gove, a community spokesperson, said that the place was so well run that the new facility at the Poverello House was modeled after their organization. No drugs, illegal activity, or violence was allowed.

The destruction of the H street encampment calls into question the rationale used by the Fresno Police Department and City officials that the reason for the destruction was to end crime and violence that was occurring on Santa Clara street. If you read the Fresno Bee story today
(see http://www.fresnobee.com/columnists/mcewen/story/8089117p-8947074c.html ) you will see a lot of comments about the crime and violence on Santa Clara street and how the city used that to justify their destruction of the homeless community. But, there was not one word in that article about the H street encampment. When our group of Indymedia reporters got to H street, there was no other media in sight and no indication that they had been there.

What we found was a group of homeless people standing outside of what used to be there home. Here, in their own words is what they had to say about this situation. Erick Grove, speaking about the new facility at the Poverello House said that “you can't even fit our camp over there [camp Connely], we sent a quarter of our people over there, the rest of us stuck it out to be there for other people that we have."

Erick told us that “we are dealing with homelessness. We've got people looking for jobs. We've put people in programs. We're taking all the stuff that they can't get into the mission after 7 o’clock, can't get into the Poverello house at all, there's no place for them. We see an old man freezing on the street, we take him in.”

In a lot of ways, this group of homeless people understood exactly what needed to be done. Erick said “we can actually build another organization to take care of all the extras and give the people something they need. Some need mental health resources, some need a program, some just need housing. As families, We're sticking together to make it happen, the city has recognized it. They say they are coming down here to help, but they do the opposite. We've taken care of crime. We've stopped a lot of crime in this area, it's about taking care of our brothers and sisters. Were here and were making the best with what we got. It's a god blessing that they feed people, but they can't do the housing part. This cold is killing people right now, the cold is very dangerous.”Dontae Johnson, another H street encampment spokesperson, said “were not blaming anybody,. Were just asking for health access and to let us have our freedom.” Speaking about the restrictions at the Poverello House he said “you can't get anything going, you have to be in by 5 PM and out by 7 AM. I think it's a control issue. They know that it scares you, you may have done time, had warrants, and they use that against you. For instance, I was riding my bike and they pulled me over. They put me on the ground and searched me, then they searched me and found out I was in the Marines, they were like 'oh you just got back, I'm sorry. Well, you shouldn't be in this area at this time.' I told them hey, I gotta be here to get dinner at Poverello at 5 o’clock.”

Johnson added “the solution is to get some of these warehouses, and get us somewhere to stay. Everybody here, we have trades, we can work here, we can do it. And we have been doing it. The city councilmen, they get in your face and look at you like there is going to be some hope and then when stuff like this happens they're nowhere to be found. That's some cold business, city council, it's messed up. So I'm like, what do we have to fall back on? We look to the authorities, and they're like go where ever your gonna go. But then we go somewhere and we get in trouble for going there. They are trying to clean up the streets granted, I get that, that's cool. But, you can't bunch everybody together, criminals, prostitution, crack. Its not like that though. There are people out here that are truly trying to get on their feet, and we need the help.”

The destruction of the H street encampment is a contradiction of the stated goals that the City of Fresno gave and the media parroted for clearing the homeless off of Santa Clara street. H street was a well functioning encampment run by and for the homeless. There was no crime taking place - even the FPD and the staff from the Poverello House agree with that assessment. So, why was the H street encampment destroyed and why was there no media (other than Indymedia) there to witness the event?

Given this list of codes the FPD can harass any person at any time they want.

Edie Jessup, who works for Fresno Metro Ministry, told me today that the City and County has money to help the poor, but they use it unwisely. She said “Fresno County runs out (of money) in September of emergency shelter funds (most all distributed through the Salvation Army for rent/mortgage to KEEP people in their housing before they loose it); very little spent on 'emergency shelter' for those on the street already, because there isn't enough. Meanwhile, the city-county, and some CBOs spend shelter money by putting people up in ratty hotel rooms for 4 nights, at the cost of a whole months rent, further expending money only to support bad housing at exorbitant cost, far from services that might help people get back on their feet or feed their kids. It is a shameful way for a large metropolis to handle few resources. Part of the problem, in addition to others, is that all services are 'faith-based', and perhaps a questionable use of federal money. They do good, but limited work, and it results in turf wars. That people have to leave shelter during the day, and line up nightly for a bed, and then be turned away without a place to go, makes tent cities emerge. To engage the police and criminalize the homeless is the worst. Exposing the land grab is righteous. Fresno should be ashamed. Perhaps Amnesty International should swoop in?”

When trying to sort out these contradictions, it is often worthwhile to FOLLOW THE MONEY. The Fresno Bee reported on Monday, February 2 that local agencies would be receiving $4.4 million dollars to help the homeless. "We're really proud we were able to bring this kind of money into the Valley," said Irene Ikeda, who works for the Fresno Madera Continuum of Care, a volunteer organization of government, nonprofit and for-profit agencies dedicated to serving the homeless. "Right now, we cannot serve the number of homeless families and individuals in our communities." You can see entire Fresno Bee story at:
http://www.fresnobee.com/local/story/8078782p-8937698c.html

To recap:
* Homelessness in Fresno has been criminalized.
* There is plenty of money for the police and code enforcement.
* Social Service agencies are receiving $4.4 million dollars to help the homeless.
* Some of the homeless are being kept in a pen on Santa Clara street.
* Those who have not conformed to life in a pen are now considered “illegal.”
* Indymedia will continue to FOLLOW THE MONEY on this story.
http://www.fresnoalliance.com/home
§Erick Grove speaks out about the H street encampment
by Mike Rhodes (MikeRhodes [at] Comcast.net) Thursday Feb 5th, 2004 6:23 PM 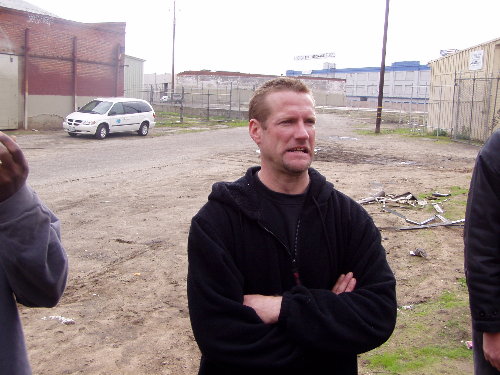 Photos by Mike Rhodes
http://www.fresnoalliance.com/home
§Dontae Johnson would like to know why they don’t open up some of the vacant buildings in t
by Mike Rhodes (MikeRhodes [at] Comcast.net) Thursday Feb 5th, 2004 6:23 PM 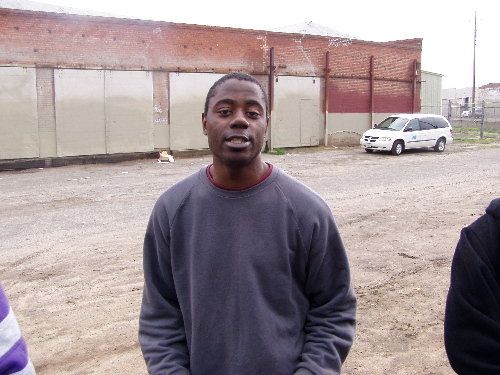 http://www.fresnoalliance.com/home
§Picture of the H street encampment minutes before it is destroyed.
by Mike Rhodes (MikeRhodes [at] Comcast.net) Thursday Feb 5th, 2004 6:23 PM 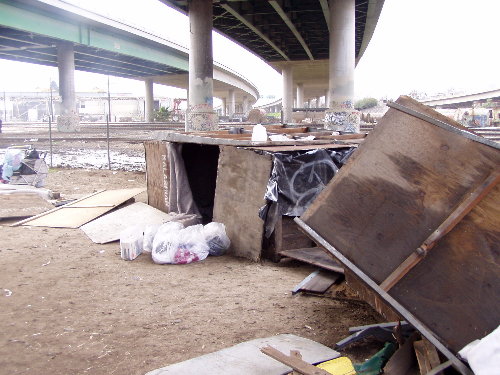