THE CITY OF FRESNO MOVES TO EVICT HOMELESS FROM TENT CITY

by Mike Rhodes (MikeRhodes [at] Comcast.net)
The City of Fresno moves to outlaw poverty and evict the homeless when they form a community. 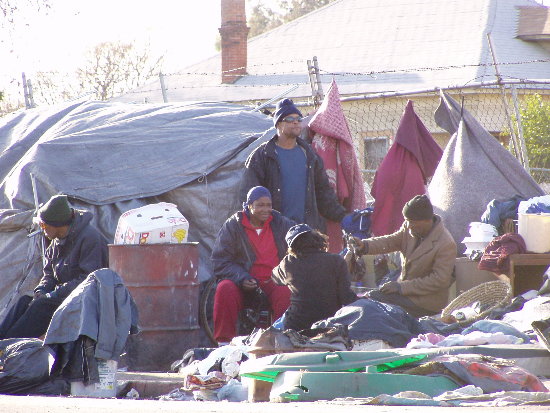 THE CITY OF FRESNO MOVES TO EVICT HOMELESS FROM TENT CITY
By Mike Rhodes
January 31, 2004

The Fresno Police Department (FPD) is making plans to destroy a tent city the homeless have built in the downtown area. The settlement that has been allowed to develop South of Ventura near F street was built when the City shifted its policy toward the homeless about 2 months ago. Instead of harassing the homeless whenever they put up a tent or piece of plastic, the FPD started allowing the structures to remain. There was even talk at City Hall about opening up some of the abandoned buildings to allow the homeless to get out of the cold and rain.

In a front page story in today’s Fresno Bee
http://www.fresnobee.com/local/story/8071498p-8931064c.html and in conversations I had with several homeless people at the tent city this afternoon, the destruction of these homes in eminent. The Bee claims that there are problems with drugs, alcoholism, and crime because of the concentration of homeless people in a small area. The plan is to force those currently living in the tent city into a closely monitored facility owned by the Poverello House. The Poverello house serves meals and provides clothing and other services. Some of the homeless people I talked to said they would not be forced into what they described as a concentration camp.

The FPD has given residents of the tent city until Monday (February 2, 2004) to dismantle their community. On Tuesday they will move in and destroy every dwelling that the homeless are currently living in. There has been no more talk about opening up unused buildings and it is not clear what the homeless will do on Tuesday. There are clearly not enough beds in this areas homeless shelters to accommodate the increasing population of people living on the street. Even if there were enough beds, not every homeless person would choose to stay at one of the homeless shelters for the night.

The expectation is that the FPD will go back to its old policy of moving homeless people on and destroying any semi-permanent dwellings that are built. The problems with that policy are obvious - homeless people have no place to store their possessions, they often times don’t have a place to get out of the cold and rain, and there is no sense of community. When the City of Fresno allowed the establishment of a tent city in this abandoned area of downtown we all knew it was not a solution to the problems of homelessness - but it was a more humane response.

What prompted the City of Fresno to reverse its policy is not known. I will go back to the tent city on Tuesday to get more information and see what happens when the FPD moves in to destroy this poor people’s community.
END_OF_DOCUMENT_TOKEN_TO_BE_REPLACED
Add Your Comments
Latest Comments
Listed below are the latest comments about this post.
These comments are submitted anonymously by website visitors.
TITLE
AUTHOR
DATE
abuse
m hudd
Recovery, a National Priority
Samantha-Hope
and yet more
Scott
scott
interested
A little more
Scott
scott
still interested
suggestion for truly interested
Scott
so, what do you suggest
truely interested
Response to Valley Boy
Mike Rhodes
vagrant removal
valley boy
Support Independent Media
We are 100% volunteer and depend on your participation to sustain our efforts!