Add an Event
Newswire
Calendar
Features
Home
Donate
From the Open-Publishing Calendar
From the Open-Publishing Newswire
Indybay Feature
Publish to Newswire
Add an Event
Related Categories: Central Valley | Womyn
CodePink Woman of the Month: Natalie Wormeli
by code pink (respost)
Saturday Jan 10th, 2004 12:02 PM
Every month CODEPINK celebrates an outrageous, outspoken, and unreasonable woman for peace. If you know of a woman that fits this description, send information into webmistress [at] codepinkalert.org. Check back for more stories of amazing women! 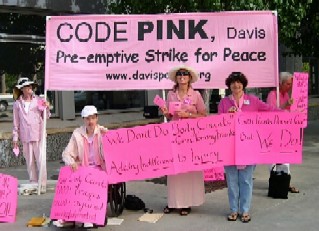 http://www.codepinkalert.org/Local_CODEPIN...
Add Your Comments
Support Independent Media
We are 100% volunteer and depend on your participation to sustain our efforts!