The Party Is Over: Jesse's Endorement of Newsom Is The Final Nail In The Democrat's Coffin

by The Party Is Over
The Party is over: Jesse Jackson's endorement of Gavin Newsom is the final nail In the Democrat's coffin. If the guy advertised and marketed to be the far left of the Democratic Party is willing to endorse a Republican whose only issue was demonizing the poor, why should progressives every vote Democrat again? 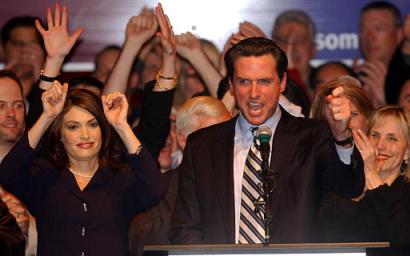 At the pro-Newsom, get-out-the-vote rally, supporters heard from the Rev. Jesse Jackson, whose telephone call from South Carolina was broadcast over a speaker. He implored those gathered to cast a ballot.

"We paid a steep price for the right to vote,'' said Jackson, who endorsed Newsom.

This is it. The Democrats are over. Clinton and Gore's stumping for Newsom was bad enough but the call by Jesse Jackson was when the Democrats jumped the shark. While Matt lost the election, look at the coverage of the Clinton and Gore visits; even the corporate media had to admit that it looked like the Party was desperate. Nobody wants to watch anymore; even fake liberals like Dean or Kucinich are starting to be seen as the same corporate product with just a slight change in the packaging.

Newsom makes sense in San Francisco, hes a conservative pretending to be left of center. One expects politicians like that in liberal towns since its a winning combination at the polls. But what does it say when the Democrats at a national level go all out to support a Republican whose only issue in the campaign was making fun of and demonizing people who can't afford a place to live. What does it say when former hero of the Left, Jesse Jackson would rather support his party than the rights of the poorest of the poor. Why should the Left ever trust another Democrat?

Who are leftwing Democrats and what do they really stand for? Howard Dean was marketed as a progressive and has now been revealed to be pro-war, pro-Israel, and for the death penalty. Jerry Brown was sold to the US public as the farthest left thing the Democrats had. He even had a show called "We the People" on KPFA. Once he got in office he turned out to be one of the most power hungry conservatives Oakland has ever had. He not only had rubber bullets shot at a small peaceful anti-war protest at the Oakland docks but now is bringing the people he had shot to trial for being in the way of the bullets.

Without the support of the Left, the Democrats will lose a good 5-10% of the vote and without that support they will never win another major election.

With their over the top support for Gavin Newsom the Democratic Party has shown us what they really stand for.

The Party is over.
§Jesse Jackson: Is your money that good, Will it buy you forgiveness...
by The Party Is Over 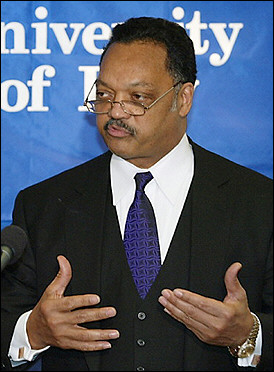 Add Your Comments
Comments (Hide Comments)
§blah blah blah
by chop
fuck you jesse. fuck you wild bill clinton. and double fuck to you gore you little puppet fuck. unbelievable. the democrats are spending money to send the minstrels to san fran to disrupt an election that so easily could have been should have been green. i think the democrapublicans should be concerned with the republicans. goes to show money can and will buy you authority everytime. well up yours newsom. here's some news for ya newSom you suck and so does your hugh grant hair do.
Add a Comment
§The Dead Democratic Party
by q2112.com
We at q2112.com strongly endorsed progressive San Francisco mayoral candidate Matt Gonzalez on our website. We walked the streets with Matt Gonzalez last weekend. Matt is wonderful, in our opinion. We have not been this impressed with a progressive political candidate in a very long time.

As for the pathetic Dead Democratic Party, we can't stand them and we have lost all respect for Jesse Jackson as well as Cecil Williams and others who supported Gavin "I'm really a Republican" Newsom. Please read:

(And speaking of Dennis Kucinich:)
Their Pilot Light Is Out. We are FedUp with the Dead Democratic Party.
http://www.q2112.com/their_pilot_light_is_out.htm

END_OF_DOCUMENT_TOKEN_TO_BE_REPLACED
Add a Comment
§Dead Democraps
by Green
They are indeed dead. But I think Kucinich has earned a hair more respect since he recently posted the Diebold memos to his site and they backed off from their lawsuit. He may not be talking about PNAC but he does more than anyone else (except for Cynthia McKinney).

Plus, ABC just dropped thier reporter off of covering him, Braun, and Sharpton so pretty soon he'll fade from the sheeple memory.
Add a Comment
§Does anyone know good email lists
by Does anyone know good email lists
Those of us who saw what the Democrats were willing to do in SF should get the word out nationwide. Aside from getting on the main Democatic email lists, what about getting on the Howard Dean lists and trying to get people to realize that he is for the war in Iraq, probably cant win, but if he does win he wouldnt be much different from Bush. Does anyone know of any good online discussions or email lists where it would be effective to start talking to progressive Democrats so their fixation on Dean can be ended?
Add a Comment
§Just So People Realize Who Jesse Jackson Supported
by Fuck The Democrats
Gavin Newsom's Record
-----
He's Clearly A Republican
Knowing that being a Republican is political suicide in San Francisco, Newsom registered as a Democrat—although he's as Republican as Karl Rove:

Gavin Newsom's Anti-Tenant Votes
Tenants and rent control will be in BIG trouble if Gavin Newsom is elected Mayor–he will be far worse than Willie Brown for tenants. Newsom is a friend of slumlords (he sponsored legislation cut penalties for Housing Code violations in half) and speculators. (He voted against amending the Ellis Act to ban evictions of tenants who are seniors, disabled, or catastrophically ill; when his mother and 3 other tenants were illegally evicted under the Ellis Act, Gavin did nothing! The Tenants Union had to bring the landlord to DA Hallinan, who prosecuted the landlord (it seems when it comes to protecting his mother vs. protecting landlords, Gavin will choose the landlords over his mother.)

Any other candidate would be much better than Newsom. Newsom does not support rent control and will work to repeal it! He gets a lot of good press (especially on Channel 2 because Ross McGowan is an investor in Newsom's businesses), spends a lot of money, looks good and has good corporate and political handlers. But the bottom line is that he votes against the average person, neighborhood interests, renters, and voters of San Francisco nearly every opportunity he gets and in favor of the corporate development, business and real estate interests.

* July 22, 2003 Voted against proposal to strengthen rent control by giving tenants more seats on the SF Rent Board.
* November, 2002 One of 2 Supervisors (Hall) to support massive condominium conversion and rent control repeal measure (Prop R) on the November 2002 ballot.
* October 7, 2002 One of 3 Supervisors (Hall, Maxwell) to rubber-stamp all of Willie Brown's nominations to the Planning Commission and Board of Permit Appeals.
* March, 2002 Prohibited from voting on limits to new "live/work" units because he is a developer of "live/work" units.
* April 15, 2002 Voted against controls on "big box" projects, like Ikea or Home Depot. Specifically voted against neighborhood notice and approval requirements.
* March 18, 2002 Opposed requiring developers to include affordable housing in their developments (Inclusionary Housing Ordinance).
* February 11, 2002 One of 2 Supervisors (Hall) to
vote against additional protections for tenants, especially senior tenants, from evictions and pass-through of capital improvements.
* August 20, 2001 Again voted against requiring developers to include more affordable housing. (He and Hall opposed resolution to Planning Commission).
* July 23, 2001 Voted against public power. He and Hall voted to prevent the voters from deciding on the ballot whether or not we should have public power.
* July 9, 2001 Voted against limiting evictions for condo conversions. One of 3 Supervisors (Hall, Yee) to vote in support of the Mayor's veto of Tenant protection Legislation.
* April 2, 2001 Voted to allow evictions of seniors under the Ellis Act. One of 3 Supervisors (Hall, Yee) voting against a resolution urging the State Legislature to amend the Ellis Act to prevent the eviction of senior tenants under Ellis.
* February 20, 2001 Voted against a temporary ban on rent increases for capital improvements.


SOME EARLIER NEWSOM VOTES (Compared to Bay Guardian Positions)
(Prior To 2001, Newsom—a landlord—was prohibited from voting on most landlord/tenant measures. In 2001, the conflict of interest law was changed, allowing him to vote. During this time he could not vote on a measure to limit OMI evictions of senior, disabled and terminally ill tenants, but indicated if he could he would vote against those protections.

Deny Eviction Defense Funds, 7/24/00: Newsom-YES, Bay Guardian-NO
Allow More Condo Conversions, Fall 00: Newsom-YES, Bay Guardian-NO
Ban Capital Improvement Rent Hikes, Fall 00: Newsom-NO, Bay Guardian-YES
Add a Comment
§Bernie Ward is Kinda Like Jerry Brown
by blech
Bernie Ward has to sound strong on issues since hes on AM radio that mainly a PR gimic. He is basically a centrist Democrat who likes to try to sounds like Rush or Savage. Hes a tool of the Democratic Party and whose purpose is to court the AM radio crowd for the Democrats. Most of what he says is intended to make the Left support him but when it comes down to his actual beliefs they are not what they appear (like Jerry Brown who went from "We the people" on KPFA to dictator of Oakland willing to shoot peace protesters and then prosecute those who were injured)
Add a Comment
§Re:&quot;so does your hugh grant hair do.&quot;
by thats low 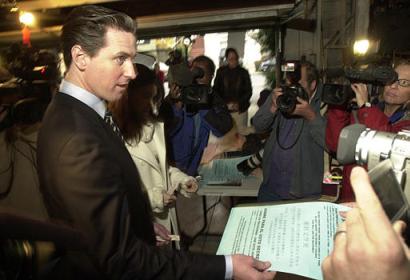 "so does your hugh grant hair do."
You may have problems with Hugh Grant, but comparing anyone with Gavin Newsom seems a little low. Jeff Goldblum's character in the movie "Igby Goes Down" was pretty close to a characture of Gavin, but Goldblum could never pull off anything as awful looking as the Gavin hairstyle (see http://i.cnn.net/cnn/2002/SHOWBIZ/Movies/09/13/in.look.peet/vert.peet.jpg ).
Add a Comment
§We know Bush IS Going To Win, So Why Are Progressives Backing A Pro War Democrat
by why?
MCLEAN, Va. (Reuters) - President Bush took his re-election war chest past $110 million at his final fund-raising appearance of a record-setting year on Thursday, as Republicans trained their sights on Howard Dean as the expected Democratic presidential candidate.
http://story.news.yahoo.com/news?tmpl=story&cid=578&e=7&u=/nm/20031211/ts_nm/politics_bush_dc

As with the SF election, it will look close at several points but the money will be spent at the last minute to make sure there is a 4-5% vcitory for Bush.
Howard Dean can't beat Bush and we all know it.

So, since Dean wants to send MORE TROOPS TO IRAQ and SUPPORTS THE DEATH PENALTY and OPPOSES AFFIRMATIVE ACTION why are there so many Howard Dean signs around Berkeley and San Francisco???

The same people who backed Gonzalez will learn nothing from the loss and back the very Party that screwed San Francisco next year. Millions will be spent on a candidate that does not represent anyone's real interests and the result will still be four more years of Bush.

We must learn from the Newsom election and ditch the Democrats. If you like a candidate and still want to vote for them (like Barbare Lee or Tom Ammiano) how about putting some pressure on them to ditch the party. Over 100,000 San Franciscans, mostly registered Democrats, voted for Gonzalez Tuesday. The local, state and national Party's ignored the will of their own constituents (MORE DEMOCRATS VOTED FOR MATT THAN FOR NEWSOM!!!), its time we put some pressure on them by getting voters to stop voting Democrat and getting progressive candidates to ditch the Party.
Add a Comment
Support Independent Media
We are 100% volunteer and depend on your participation to sustain our efforts!