Newsom Pictures From The Not So Distant Future

by pics
Gavin Newsom Pictures From the Not So Distant Future 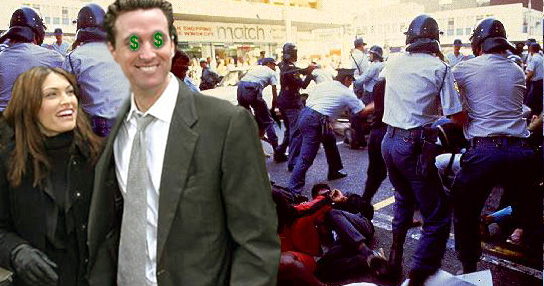 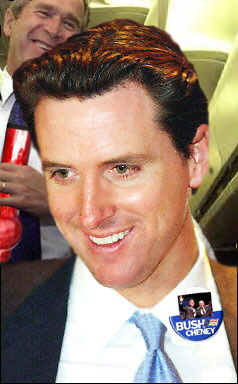 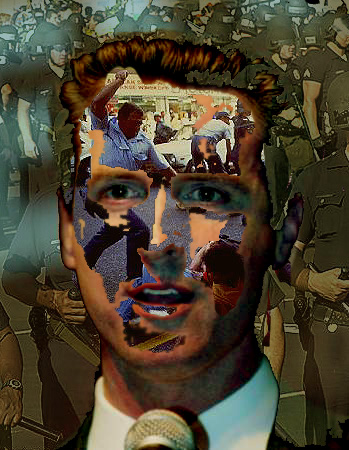 Add a Comment
§celebrity justice correspondents
by cp
It's creepy how the news has these celebrity justice correspondents such as Kim Newsom on with the same regularity as the weather specialist. Amy Goodman pointed out that CNN reports exactly the same story in an entirely different perspective in CNN international and regular domestic CNN - for instance, when the soldiers were bringing down the statue of Saddam Hussein in Baghdad, they showed war casualties in CNN international's coverage.
Add a Comment
§Newsom and Republicans
by Mike
Every Republican I know in San Francisco loves Newsom. They make up 10%+ of the electorate in San Francisco and seem like guaranteed votes for him. But, he is doing this last minute shape shifting thing of claiming he supports progressive causes. Is there any chance his guaranteed 10% may stay home on election day? The only way Newsom can prevent this is if he is saying two different things to the two different audiences. It would be interesting to hear what Newsom's speechs these days sound like when they are to his traditional supporters.
Add a Comment
§Newsom's way of talking seems familar
by Newsom Comic Strip

We heard enough from this Newsom recently when he made an appearance on KGO Radio (San Francisco) one evening. What we heard was essentially a two-hour long ad for his campaign on a corporate media station. He was on the air with one of the talk show hosts in---what we would describe as---a "love fest," or "kiss in/kiss up" session between this Newsom and the host. Newsom wasn't challenged at all by the host. The host just fed Newsom issues to respond to for the most part. During those two hours on KGO Radio, we heard the following political speak/clichés from this Newsom:


“Hit the ground running”
“Take risks”
“More with less”
“We’re on the same page”
“Get back to basics”
“This is tough stuff”
“It’s time to put aside our differences and start working together.” [Editors' Note: So what happens when we start working together and our differences crop up? Have you thought of that Gavin Newsom?]
“We need to focus on the future.”
“We’re well-positioned now”
“Restoring confidence and trust.”
“The people are looking for change.”
“Put the cops on the proverbial dots.”
“I think the jury’s still out.”
“Mistakes made, lessons learned.”
“We can agree to disagree.”
“I care deeply and personally about this city...we’re not that city on the hill that we were in the past.”
“We need someone who can make the tough choices.”

http://www.fatalexception.org/action_item.html
Add a Comment
§More on Gavin
by more on gavin
"
In July the San Francisco Tenants Union filed suit against Newsom and Kaufman for voting on the pass-through while recusing themselves on legislation restricting owner move-in (OMI) evictions.
...
Shortly after he was appointed, he attacked the ordinance barring the city from contracting with companies that do business with Burma, in light of the country's brutal dictatorship. "
http://www.sfbg.com/News/33/04/Features/gavin.html

"In contrast, the board's Audit and Government Efficiency Committee voted to repeal a law that prohibits giving city contracts to companies who do business with Burma's repressive government. Sup. Gavin Newsom said he sponsored the repeal on the advice of the city attorney, citing a June Supreme Court ruling that struck down a similar law in Massachusetts. Newsom's legislation is part of his ongoing campaign against San Francisco's "selective purchasing" laws, which use the city's financial clout to promote human rights abroad.

Human rights advocates blasted the supervisor, saying there are ways to reform the law while still complying with the Supreme Court decision. Shannon Wolfe of San Francisco-based Global Exchange said the city could simply suspend the law while crafting one of many possible alternatives. "I have a feeling that Newsom may be beholden to corporate interests rather than the concern for human rights," Wolfe said. "
http://www.sfbg.com/News/35/02/02ogwb.html

"Newsom Facts of the Day

He's Clearly A Republican
Knowing that being a Republican is political suicide in San Francisco, Newsom registered as a Democrat—although he's as Republican as Karl Rove:

Gavin Newsom's Anti-Tenant Votes
Tenants and rent control will be in BIG trouble if Gavin Newsom is elected Mayor–he will be far worse than Willie Brown for tenants. Newsom is a friend of slumlords (he sponsored legislation cut penalties for Housing Code violations in half) and speculators (He voted against amending the Ellis Act to ban evictions of tenants who are seniors, disabled, or catastrophically ill; when his mother and 3 other tenants were illegally evicted under the Ellis Act, Gavin did nothing! The Tenants Union had to bring the landlord to DA Hallinan, who prosecuted the landlord (it seems when it comes to protecting his mother vs. protecting landlords, Gavin will choose the landlords over his mother.)
"
http://www.sftu.org/
Add a Comment
§$500 donation exactly for what?
by just wondering
the chronicle expressed the $500 donation that newsom made was for the local republicans so he could get on their mailing list or something. does anyone know if that was directly connected to the george bush campaign? and if so, just what was the purpose of newsom (a democrat) giving this money to the republicans knowing san francisco would vote highly in favor of gore? it doesn't seem it would have an effect on gore.

it's not looking as simple as the accusations.

Add a Comment
§answer
by answer
Newsom is the conservative candidate in SF. He needs the moderate vote to get a majority but his base supporters are Republicans. Why did he give money to Bush? He needed his name on the flyers sent out to Republicans telling them how to vote.

Why does this matter?

His donation to Bush wasn't because he wanted Bush to get elected but because he wanted Bush supporters to also vote Newsom. In a way this is worse than if he openly supported Bush. Newsom has no political views of his own and just plays polls. While most Democratic politicians would see it as bellow themslevs to court a Republican endorsement, Newsom just saw it as an oppurtunity to get more votes.
Add a Comment
§use temp in the financial district
by newsom supporters..
I use temp in the financial district and the people who were gung ho for Newsom tended to be the late twenty / early thirty new wealth Republican crowd that is still gung ho for Reagan (since perhaps they saw him as a father figure in their youth). I went to a party in the Marina at a house of some of these twerps and they even had a giant picture of "the Gipper" on their wall. These people are not just Newsom supporters, they created him and my guess is that they make up most of his campaign workers.
Add a Comment
§&quot;the mainstream media&quot;
by Fred
I emailed to KPIX last night to complain that they hadn't mentioned it. But more needs to be done. Even if you just send one email, it all adds up.
Add a Comment
Support Independent Media
We are 100% volunteer and depend on your participation to sustain our efforts!