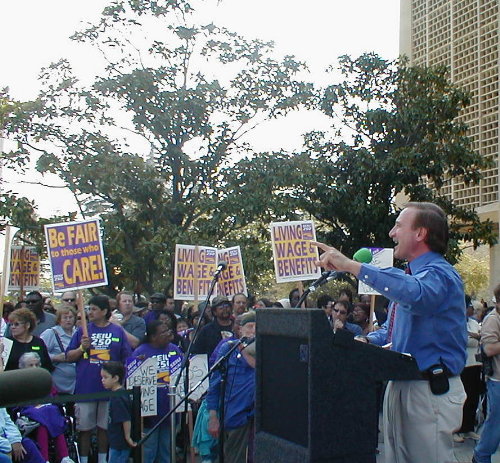 Negotiations between the County of Fresno and 10,000 Homecare Workers represented by SEIU, Local 250, fell apart today after County negotiators continued to deny workers a living wage. After months of frustrating negotiations, the breaking point came when the County offered the employees no wage improvement for a year and a half, and then only a 10 cent per hour increase. They also offered limited health coverage for less than one-third of the workforce. Fresno County homecare workers provide lifeline assistance services such as bathing, cleaning and personal hygiene, meal preparation, medical assistance, transportation to medical appointments, and protection for people whose conditions require that they be closely supervised. Homecare workers currently earn the minimum wage, $6.75 an hour, and have no health care, sick leave, time off or other benefits. These poverty-level wages and the lack of any benefits at all, have produced high turnover and a severe shortage of homecare workers leaving thousands of seniors and people with disabilities at risk of losing the care they need and deserve.

Under a new state law, the Fresno County Board of Supervisors has the ability to improve wages and benefits in order to attract and retain the qualified homecare workers, who are so critical to providing quality care.

"By doing the right thing, the County will also draw $45 million annually in additional state and federal funds to boost homecare workers' wages and benefits," said Sal Rosselli, President of Local 250. "In addition to lifting homecare workers out of poverty, these funds will provide an extraordinary, permanent boost to the area's economy."

Dolores Huerta, co-founder and 1st Vice President Emeritus of the United Farm Workers of America, AFL-CIO (UFW) will be part of a public rally schedule for Tuesday at 11:00 am outside the Fresno Hall of Records.

SEIU Local 250 is the second-largest health care local union in the United Stares representing more than 80,000 workers. They are part of the Service Employees International Union, with 1.4 million members in the U.S. Canada and Puerto Rico and is the largest and fastest growing union in North America.