To: The promoters of the We Are Working For Peace and Justice Manifesto,

From: CCRI-CG of the EZLN,
Mountains of the Mexican Southeast.


In the name of the Clandestine Revolutionary Indigenous Committee
- General Command of the Zapatista Army of National Liberation in
Mexico, I am asking you to attach my signature to the We Are Working
For Peace and Justice manifesto, with the understanding that it
includes the signatures of all the members of the CCRI-CG of the EZLN.

We are also informing you that we have taken the liberty of preparing
a communiqué inviting civil society of Mexico and of the world to
promote the knowledge, discussion, enrichment and signing of the
manifesto. We hope that you do not object, but if you think that
our initiative could be detrimental to the purpose which inspires
the statement, you need only let us know and we will respectfully step aside.

Regardless, we are letting you know that we welcome your initiative,
and we are quite proud to know that there are intellectuals who
turn towards the people of below and who do not allow themselves
to be seduced by the color-blind eye of the Cyclops of Power.

The right to rebellion, to defy those who oppress us with various
alibis (always the gods of Power and Money with different masks),
is universal. Saying NO to the indifference which goes hand in
hand with the current war in Iraq is a duty, and it is also universal.

Vale. Salud and may the world which is to come have the distinctive signature of no one.

>From the mountains of the Mexican southeast.

By the Clandestine Revolutionary Indigenous Committee - General
Command of the Zapatista Army of National Liberation.

As you can see in the attached communiqué and letter, we have decided
to sign the We Are Working For Peace and Justice document. The
explicit signature of the entire CCRI-CG of the EZLN is not possible
for the obvious reasons of time and distance, but all of theirs go in mine.

We think that the document is well born, that is, it was not created
out of the stupid, petty calculations of a political class like
the Mexican one, who are being made sensitive to a war in another
place (the fact that the Mexican senate is calling for a march is
ridiculous; their members voted in favor of a local war against
the Indian peoples) by the elections, but by thinking people who
are sincerely concerned about what is happening and about what will be happening.

Although we have seen some omissions in the text, we have decided
to sign it without conditions, because we thank that its enrichment
should be the product of reflection by the common people, by citizens
throughout the world (which, if we are not mistaken, is the spirit which inspires the manifesto).

Even so, we believe it is advisable to note that the statement does
not make a clear differentiation between the North American government
and the people of the United States of America. Bearing in mind
that many people in the American Union have mobilized and have promoted
acts of civil disobedience in response to this war, it seems to
us that it a distinction in that regard would not be uncalled-for.
The public declarations by North American academics, intellectuals,
artists, religious persons, workers in alternative media, students
and citizens against the war - even in counterpoint to the warlike
manipulation by the large communications corporations - have made
us see quite clearly that this is a war by the Bush government,
not by the people of the United States. It seems to us that the
purpose of this initiative is to question the people, not the governments,
about the war, and so we should also include the North American people.

Lastly, I am letting you know that we are now sending an email to
http://www.zmag.org so that the EZLN's signature can be included in the document.

Vale. Salud and may the universal sense of indignation be seen
in all colors, including those which walk north of the Rio Grande.


>From the mountains of the Mexican Southeast.
Subcomandante Insurgente Marcos
Mexico, April of 2003.

Communiqué from the Clandestine Revolutionary Indigenous Committee
- General Command of the Zapatista Army of National Liberation.
Mexico.
April of 2003.
To the People of Mexico:
To the Peoples of the World:

In violation of international laws and those of reason and humanity,
the governments of the United States and of Great Britain, with
support from other governments of the world, have invaded Iraqi
territory. The attack on Iraq is just one page in the script of
terror which the power of money has prepared for the entire planet.

At this moment, the war is claiming direct victims, primarily among
civilian men, women, children and old ones. The destruction which
the military forces of the United States and Great Britain are bringing
about will provoke more civilian deaths and more misery for the Iraqi people.

Throughout the world honest persons have demonstrated in order to
show their repudiation of this war. It should be noted that it
has been primarily the young persons, women and children who have
raised up their NO to the war with the greatest firmness.

As never before in history, this war has provoked a universal feeling
of rejection - even though it has not yet been reflected in all
its magnitude - in the mobilizations which have been carried out on the five continents.

As part of the acts in repudiation of this war, a group of persons
from several countries recently announced the We Are Working For
Peace and Justice statement, a document which attempts to define
a clear and universal position against the war in Iraq. Among the
document's many virtues is that of going beyond the current situation
provoked by the present war conflict, promoting a serious and intercontinental
reflection against neoliberalism and the destructive effects of
globalization. They have also proposed a dynamic of dissemination
and discussion from below, with the people, not with the political class.

Those who initiated the statement have said that their objective
is to promote it among all the people, throughout the world, who
are against the war, including the zapatistas.

In consideration of the above, the EZLN says its word:

First - The EZLN welcomes this worldwide initiative and all the
mobilizations which have been carried out in order to repudiate
the death and destruction in the Middle East.

Second - Consequently, the EZLN is signing the We Are Working For
Peace and Justice statement, without any conditions. The CCRI-CG
of the EZLN, commits, through the signature of its spokesperson,
the word of its 77 comandantes, and it is now undertaking its dissemination
in the 2222 zapatista villages and communities throughout Mexico.

Third - The EZLN is calling on Mexican and international civil
society to learn about, discuss, enrich and sign said statement.
We are especially calling on young people, women and children to
embrace this statement and to promote it throughout the world.

Fourth - The EZLN is directing itself particularly to individuals
and social and non-governmental organizations in Mexico to undertake
a national campaign of dissemination of the We Are Working For Peace
and Justice document, promoting its discussion, enrichment and signing.

The EZLN is especially asking the Zapatista Front of National Liberation
(FZLN), in unity with social organizations, groups and individuals,
independents and critics of the political parties, to set up tables
for information, discussion and the collection of signatures, and
to form brigades which, with the same objective, will travel to
schools, neighborhoods, factories, businesses, villages, ejidos,
communities, and anyplace else where honest and noble people exist,
in order to invite them to join in the repudiation of the war.
The EZLN is proposing that, in said tables and brigades, they inform
and discuss, not just the current war in Iraq, but also the disastrous
consequences of neoliberal policies and globalization in our lands,
denouncing the accomplices and local operatives of those policies of death and destruction.

Fifth - The EZLN is directing itself to the committees in solidarity
with the zapatista struggle in Europe, in Latin America and in the
rest of the world, to solicit, respectfully, in their countries,
and in accordance with their means and ingenuity, promoting the
manifesto, knowledge about it, discussion, enrichment and signatures.

The EZLN is making a special and respectful request to the North
American and British peoples, to their organizations and individuals,
artists, intellectuals and religious persons, to - whether by signing
this document or through other means - distance themselves from
the murderous madness of their respective governments.

Sixth - The EZLN is proposing that the different bodies which are
created to coordinate efforts and carry out joint actions should
regularly inform the public on the activities they carry out and
the number of signatures that are accumulating, in addition to communicating
by web page with the people who initiated the document: http://www.zmag.org

Seventh - The EZLN is proposing that on May 1, 2003, International
Worker's Day, a worldwide report should be given on the progress of this initiative.

Signing a document could appear to be little for some, but it is
not just the signing that is being proposed, but its discussion
and enrichment. The signing of the statement does not involve abandoning
the carrying out of other mobilizations. On the contrary, it will
allow more people to participate, more people to listen, and more
people to be involved in a movement that is worldwide, like the
war which has provoked it. What is important to the zapatistas
is not so much the number of signatures, but the rebellion and defiance which inspire them.

In all ways, in all places, in all languages and with all colors, we are saying: NO to the war!

>From the mountains of the Mexican Southeast. 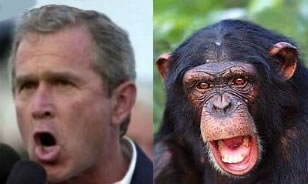 AT LEAST THE ZAPATISTAS CARRY ARMS AND KILL PEOPLE!

We Stand for Peace & Justice
I stand for peace,justice, democracy, autonomy, international law, no bullies, no bribers, for internationalism, freedom, democratic foreign policy that supports popular opposition to imperialism (dictatorship,political fundamentalism, for solidarity, the poor, the excluded, for diversity, for an end to racism and we stand for an end to repression at home and abroad and for sustainability

Despite massive disinformation millions oppose unjust, illegal, immoral war, the conditions, mentalities, and institutions that breed and nurture war and injustice. We stand against the destruction of forests, soil, water, environmental resources, and biodiversity. We stand against economic, political, and cultural institutions that promote a rat race mentality, huge economic and power inequalities, corporate domination even unto sweatshop and slave labor and gender and sexual hierarchies.

I oppose any nation spreading an ever expanding network of military bases around the world and producing an arsenal unparalleled in the world.

The U.S. is now regarded as the major threat to peace in much of the world.

THE SHORT SHORT VERSION
"I STAND FOR A SYSTEM ECOLOGICLAL SOCIALISM that is decentralized, democratic and tolerant."

I realize that by "STANDING FOR" this alternative world I will have sacrifice my time, my wealth, my health and my life. AT some point I may no longer be able to STAND and I may need to crouch behind the barricades as I fire my last bullet against the empire.

http://la.indymedia.org/news/2003/04/45783...
Add a Comment
Support Independent Media
We are 100% volunteer and depend on your participation to sustain our efforts!