Only one Tour stop left in the Bay area before the delegation moves on:

There was a definite union presence, but along with that were many folks that had probably heard about it through the grapevine. The house was packed by the end of the presentation and the delegation was swarmed with folks eager for the critical eyewitness information they were providing. Many thanks were also given to the delegation for having come halfway around the world to share with us and the Solidarity Banner, reflecting this was full of messages of support.

Mohammed spoke about the daily toils of working in Palestine, while Hekmat highlighted the humanitarian dangers of living under the Occupation.
All in all, the north bay part of the tour was a rousing success.

A Labor delegation is being prepared from this country as well; to go to Palestine and witness the conditions under which the workers are trying to live and work in the Occupied Territories, as well as inside Israel.
§The delegation members
by Jesse (jessebchristensen [at] hotmail.com)
Friday Nov 29th, 2002 4:08 PM 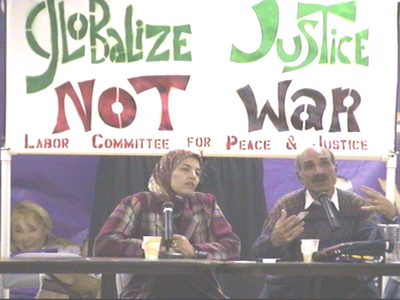 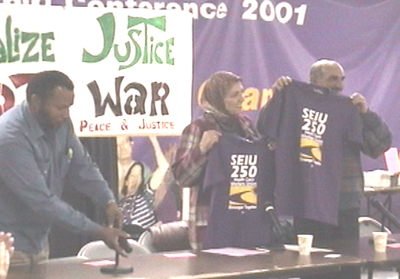 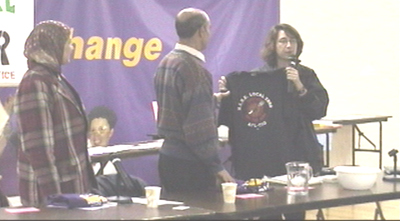 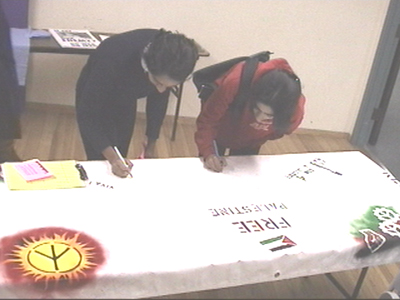 After the event the delegates took the time to interact with anyone on a personal level before they left the tour stop, building a critical network between workers in Palestine and wokers here in America.
Add Your Comments

§Are they coming to NYC?
by NYC
Sunday Dec 1st, 2002 9:09 AM
Is NYC on their scheduled tour?
Add a Comment
§Yes
by Jesse
Monday Dec 2nd, 2002 8:59 PM
Ive been trying to locate a complete schedue for the rest of the tour, but so far have been unsuccessful. I'll post the full schedule as soon as I get one.

In the meantime, I do know they are touring NYC last before they go home to Palestine so you should be able to have time to locate them. Try contacting the "Labor Committee for Peace and Justice" in your area. I THINK that's who's hosting them in NYC. I'll post back when/if I get any more details.