by Jesse
The Palestinian Trade Union Delegation Tour's second stop of five in the bay area. 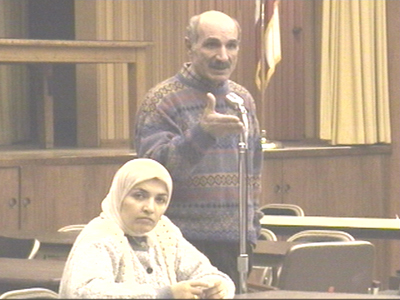 The second Bay Area stop for the Palestinian Trade Union Delegation was a rousing success. A crowd of bay area unionists received them warmly at the San Francisco Labor Council meeting, and asked plenty of questions. Mohammed spoke about the relations that workers in Palestine have with those in Israel, including specific relations with the Histadrut (Israeli trade union). He also spoke to the bombing of the headquarters of the PGFTU by the Israeli military with US-provided military hardware, underscoring the danger of living as a worker in a nation under a brutal occupation.

Hekmat explained about how this tour is the first time she has been able to meet the other member of the tour: Mohammed Saleh. With reserved laughter at the tragic situation the crowd clapped in response, celebrating the fact that they could finally meet. Even though they live only 2 hours driving time apart.

Mohammed highlighted the union situation, while Hekmat underscored the humanitarian aspect of living under such an oppressive situation, and the human cost of the occupation. Particularly the toll taken on the children. How they can't draw pictures of anything but the images from the Occupation and Intifada. Mohammed told a story about how his young boy had been woken up in the middle of the night by one of the invasions of his city. He offered his son to sleep in his bed that night and his son agreed, but wanted to sleep under the bed, because he felt it would be safer than sleeping on top like normal.

They ended by inviting everyone there to come to Gaza and the West Bank and see for themselves the situation they live and work in. The labor committee for peace and justice is putting together a delegation to send to Palestine.


THE TOUR ONLY HAS THREE MORE BAY AREA STOPS!!!! DON'T MISS OUT! 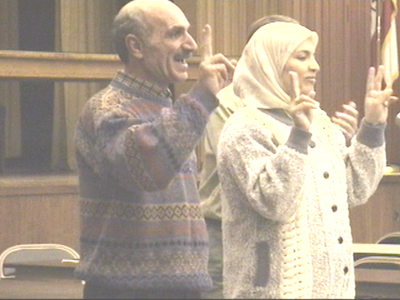 The delegation recieved a standing ovation, and as well a rousing "solidarity clap."
§Making friends
by Jesse 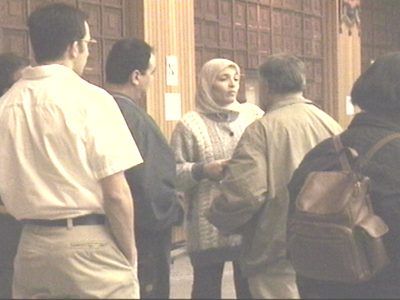 After the events, each member of the delegation is surrounded with people eager with questions and comments, which they happily oblige. Others gather informational material from the liturature table.
§Union members sign the banner bound for Palestine
by Jesse 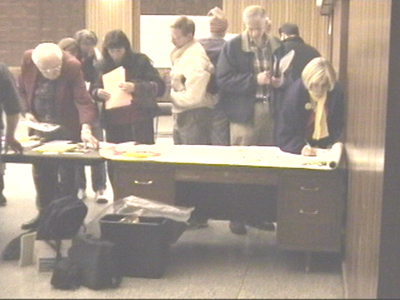 A banner decorated with slogans and artwork was given to the delegation for purposes of gathering signatures and messages that those in attendance wanted to send back to those who couldn't make it.
Add Your Comments
Latest Comments
Listed below are the latest comments about this post.
These comments are submitted anonymously by website visitors.
TITLE
AUTHOR
DATE
The Palestine General Federation of Trade Unions
Jesse
Report back from the first stop
Jesse
Support Independent Media
We are 100% volunteer and depend on your participation to sustain our efforts!