Add an Event
Newswire
Calendar
Features
Home
Donate
From the Open-Publishing Calendar
From the Open-Publishing Newswire
Indybay Feature
Related Categories: Iraq | Anti-War
Bush And Blair: Using fear and mass destruction for political ends...
by Bush&Blair 21st Century Fascism at Its Worst
Monday Nov 11th, 2002 8:27 PM
The way the US government has been playing up the terrorist threat is nonsensical. The only real attack in the US since 9/11 was the anthrax attack and that was most likely by some right wing loony (perhaps similar to the Smash The Left or Bush Admirer types who post here) rather than by the foreign nationals who are now being tracked and fingerprinted based off a now formalized process of racial profiling...

And now Bush and his new favorite poodle Bair plan to invade Iraq freeing up more WMD for nongovernmental terrorists...

Americans may be stupid but how can the UK actually be following an idiot like Bush?? 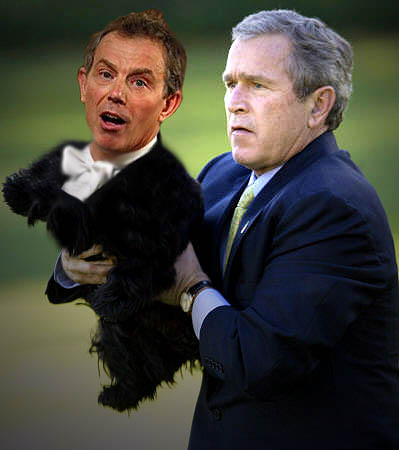 Grin and bear what exactly?

While it's very easy to get into an argument while you're drunk, it's hard afterwards to work out who won. As a general rule, whoever mentioned the Nazis first lost. An appeal to history's favourite evil goosesteppers is there to justify a kaleidoscope of action: from going to war against a sneaky foe, to weighing British bananas in British pounds and ounces. But its core is this: "I have just likened you to an evil so pure as to be unarguable. So, you'd jolly well better shut up!" It's an egregious, dozy, meaningless, emotive catch-all.
Right, now I'd like to extend that, and call for an end to any appeal to any aspect at all of the second world war. Until 9/11, Churchill was only really mentioned in the context of the ugly lady who said he was drunk (and in the morning he would be sober, blah, blah and furthermore blah). Following the attack on New York, commentators were keen to confetti both Blair and Bush with the plaudit "a lot like Churchill"; by which, presumably, they meant "a man able to see his country, or one similar, attacked and not go completely to pieces and ask his mum to take over". Both men liked the comparison rather a lot, and sought to maximise it by making Churchill-like speeches, where they promised not to tire, nor falter, nor refuse to fight anyone, whether he was on a beach or not. It was just a bit of harmless statesman fun.

Much more difficult to stomach, though, is being called upon to do demonstrate "Blitz spirit". This is a keynote of the Blair rhetoric in these terrorised times (notably, last night's speech at the Lord Mayor's banquet). Now, Blitz spirit combines a number of characteristics that are thought to be quintessentially British: stoicism and phlegm, taking things on the chin, knuckling down to business, co-operating instead of whining - you know the kind of thing. It also reminds us of that time we won a great big war, so you could say it has a feelgood factor.

When politicians say it, they do so under the auspices of appealing to our best, most sturdy and unflappable natures. What they're really asking for, though, is the complete suspension of our critical faculties. Just for the time being, they want us to stop asking questions. Of course, this was fine during the actual Blitz - what was there to ask, anyway? Why are we putting up blackout curtains? Why are we sleeping in tube stations? Why are so many people dead? Ah, I see - because of those huge bombs!

But right now, the situation is a bit less self-explanatory. There are rumours of a nerve gas or bomb attack on the tube, which were apparently discussed at "secret meetings" between David Blunkett and special branch last week. Officials, the story goes, have called these attacks "very likely". I don't want to sound like the kind of fusspot who would have surrendered to Jerry the first time my window boxes took a hit, but don't we need to be told how likely is very likely? Is it unreasonable to wonder whether or not local councils have really been told to prepare "body holding areas"? Have hospitals really been issued with anti-radiation drugs? Are RAF fighter pilots really being given psychological training to enable them to shoot down a passenger plane, if the time came? Don't all these measures, taken together, seem to suggest that MI5 doesn't have any concrete intelligence at all, but is just trying to work out what it would do if it really wanted to cause trouble?

The information reaching us at the moment is utterly woeful. First, we got the accidental memo telling us we were in mortal danger, which turned out to have just got jumbled up with the one telling us to mind our bags while Christmas shopping. Then, the Observer reported anonymous "intelligence sources" talking of the "background noise", which suggests "increased activity" from al-Qaida. There are "secret meetings", not so secret that their contents weren't made available to the News of the World, but way too secret to spark any official announcement. There are some chilling insinuations in the media about provisions for disaster made by health authorities, but what have we actually been told by the government? Don't go to the Yemen, unless you really need to. Oh, and mind your bags while Christmas shopping.

Nobody wants a panicking populace, and nobody wants everyone to start travelling by bus, either (it would be hell - probably worse than nerve gas). In fact, whatever information we were given, we'd not be able to do anything about it, and we'd probably end up just shrugging our shoulders, in a manner very closely approximating Blitz spirit. But you cannot manifest Blitz spirit on demand - you have to at least have an idea about what grim reality you're grinning and bearing before you can grin and bear it.

The fact is, all these war-words are intended to bypass our minds, shut us up, and give us a nice warm feeling inside. It doesn't work. And while we're on the subject, Saddam Hussein bears basically no relation at all to Adolf Hitler, and I don't want to hear one more word about appeasement.

http://politics.guardian.co.uk/attacks/com...
Add Your Comments
LATEST COMMENTS ABOUT THIS ARTICLE
Listed below are the latest comments about this post.
These comments are submitted anonymously by website visitors.