Add an Event
Newswire
Calendar
Features
Home
Donate
From the Open-Publishing Calendar
From the Open-Publishing Newswire
Indybay Feature
Related Categories: Iraq | Anti-War
A Peace Poster Project
by Cole (musicalcole [at] hotmail.com)
Monday Nov 11th, 2002 2:38 PM
We created a poster that is spreading around the world and can be downloaded by accessing http://www.nomorevictims.org/24x36.pdf
The poster features a powerful Alan Pogue photograph of an Iraqi girl who was injured in a US bombing raid south of Basra in April, 1999. 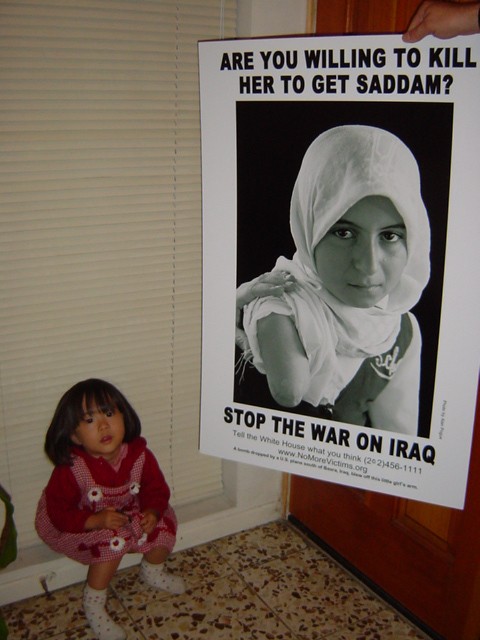 An Open Letter to President Bush

I am writing as a citizen of the United States who is deeply worried by your headlong rush to war in Iraq. The United States is increasingly isolated, and I believe the near and long-term consequences of your national security policy will endanger American citizens. It poses a threat to the citizens of the world. I urge you to reconsider your course and your insistence on this war.

Many of our allies oppose war against Iraq. France is against it. Germany is against it. Russia and China, with whom the United States has sought better relations, oppose it. Large demonstrations have been held, both here and abroad. Four hundred thousand people gathered in Trafalgar Square. More than a million in Italy. One hundred fifty thousand marched in the streets of Washington, D.C. Tens of thousands in cities all across America. Hundreds of thousands in cities all across the world. And these people assembled for one purpose: to oppose an American conquest of Iraq.

In your State of the Union Address, you said the Iraqi regime had "agreed to international inspections -- then kicked out the inspectors." That was a lie. The Clinton administration ordered UN weapons inspectors out of Iraq in 1998, and bombed military and economic sites in violation of the 1991-92 armistice accords.

In September, you cited an International Atomic Energy Agency report as saying that Iraq is six months away from developing a weapon. That was a lie. What the report actually says is:

"Based on all credible information to date, the IAEA has found no indication of Iraq having achieved its program goal of producing nuclear weapons or of Iraq having retained a physical capability for the production of weapon-useable nuclear material or having clandestinely obtained such material."

Senior members of your administration have corrupted the intelligence agencies. Vince Cannistraro, former head of CIA counterterrorism, told The Guardian, a London Newspaper:

"Basically, cooked information is working its way into high-level pronouncements, and there's a lot of unhappiness about it in intelligence, especially among analysts at the CIA."

"A growing number of military officers, intelligence professionals and diplomats privately have deep misgivings about the administration's double-time march toward war. They charge that the administration squelches dissenting views and that intelligence analysts are under intense pressure to produce reports supporting the White House's argument that Saddam poses such an immediate threat to the United States that pre-emptive military action is necessary."

The truth is your adversary, Mr. President. You are peddling this war with lies and deceit. 9/11 taught us that we cannot afford to ignore the truth about US foreign policy and our use of unprecedented military power to inflict harm on others.

A June 23, 1991 article in the Washington Post quoted one Pentagon planner as saying, "What we were doing with the attacks on the infrastructure was to accelerate the effect of sanctions." And it worked. The World Health Organization reported, "The infrastructure, the public services and, above all, the health and human conditions of the population, particularly the children, the women, the elderly and the disabled, started to decline rapidly after 1991."

According to various health and humanitarian organizations, upwards of 1.5 million Iraqi civilians have died as a result of US military assault and sanctions. More are dying every day. The following is from the World Health Organization’s July, 2000 report on the effects of sanctions on the civilian population of Iraq:

"As of May/June 2000, the Food and Agriculture Organization (FAO), World Food Programme (WFP) and the World Health Organization (WHO) confirmed there were still about 800,000 children under 5 years who were chronically malnourished. The report also indicated a high prevalence of anemia in schoolchildren...an estimated 1,910,309 children were suffering from protein-, calorie- and vitamin-related malnutrition in 1998...even more alarming is that there is a real possibility that many of these children will fail to catch up and achieve their potential intellectual growth and development in later life. Particularly significant are the unacceptably high infant mortality rate and deaths of children under 5 years."

The sanctions are enforced by the United States, often in the face of our allies’ objections. Hans Von Sponeck, UN humanitarian aid coordinator for Iraq, resigned in protest, calling the sanctions regime "genocide".

"It is dreadful to think of entire populations subjected to avoidable health conditions; it is even more dreadful to contemplate an entire generation of young people having their right to human development compromised."

Are we really going to bomb these people again?

And Iraq is only the beginning. We are told that the US military may go to war in as many as 60 countries. Your national security policy proclaims the right of the United States to preemptively attack any nation on earth. We read that an "unnamed Administration official" told the London Observer "if it means we are embarking on the next Hundred Years' War, then that's what we are doing."

Has our country declared war on the world? Are you prepared to tear up the Constitution, the Bill of Rights, the Nuremberg Protocols, the Geneva Conventions, and the Biological, Chemical and Nuclear Weapons Conventions in pursuit of a global war?

Ari Fleisher, your press secretary, told us we "should watch what we say." Are we to remain silent while your administration squanders the public wealth on endless wars of domination? Are we to say nothing while the most powerful military machine in the history of mankind slaughters women and children in our name?

When told that 5,000 Iraqi children were dying each month under sanctions -- that 500,000 children had already died as a result of sanctions -- former Secretary of State Madeleine Albright famously replied: "I think this is a very hard choice, but the price -- we think the price is worth it." Her reply speaks volumes about the nature of US foreign policy and the people who design and carry it out. How many Iraqi children are you prepared to sacrifice? Are you prepared to kill a hundred? A thousand? A hundred thousand? Would that price be too high?

The Iraqi people have suffered enough at the hands of our government. A horrendous crime has already been committed against them. This bullying indifference to Iraqi suffering, this arrogant disregard for the rights and interests of other nations, disgraces the United States and earns the enmity of people all over the world. They are shocked by our hypocrisy. We should keep in mind that there is no official US definition of terrorism. The great minds in your administration can’t find one that is not self-indicting.

We cannot preserve human rights by denying them to others. We cannot promote international stability by bombing other nations into submission. We cannot advance democracy by propping up authoritarian regimes. And we cannot achieve security by carrying out wars of aggression. When the powerful refuse to be restrained by law, they sow the seeds of terrorism.

http://www.nomorevictims.org
Add Your Comments
Support Independent Media
We are 100% volunteer and depend on your participation to sustain our efforts!