The full Amnesty report is available online at:
http://web.amnesty.org/ai.nsf/recent/MDE151432002!Ope 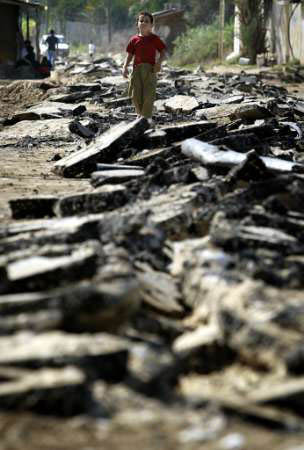 **Updates(from http://jerusalem.indymedia.org/)
JENIN
November 1 2002:Four homes that belong to activists from the Fateh and Islamic Jihad movements were demolished by the army, using explosives or bulldozers. and over one-hundred people were arrested in Jenin alone in the last few days, beginning with a massive Israeli raid on the town. Palestinian sources contest that the number is much higher, claiming that it also included elders and youth.

CAZA
November 1 2002:Three Palestinians were killed and a few others were wounded in an explosion that rocked a neighborhood in Gaza. Two more were shot by Israeli forces in Tulkarm, while news reports say that Palestinian fighters surrounded an Israeli army unit in the town.
Hamas Movement said that the three killed are members of its military wing, concluding that the explosion was a result of a “technical error”, and not a planned assassination by the Israeli army.

http://www.PeaceNoWar.net
Add Your Comments
Support Independent Media
We are 100% volunteer and depend on your participation to sustain our efforts!