Add an Event
Newswire
Calendar
Features
Home
Donate
From the Open-Publishing Calendar
From the Open-Publishing Newswire
Indybay Feature
Related Categories:
Come Out to Rally at the SHU on Market!!
by Wendy (uhurureparations [at] yahoo.com)
Monday Nov 4th, 2002 3:25 PM
Meet at 5pm to rally on Powell and Market prior to Press Conference Exposing What the Candidates Will Not: Prison Torture in California!! 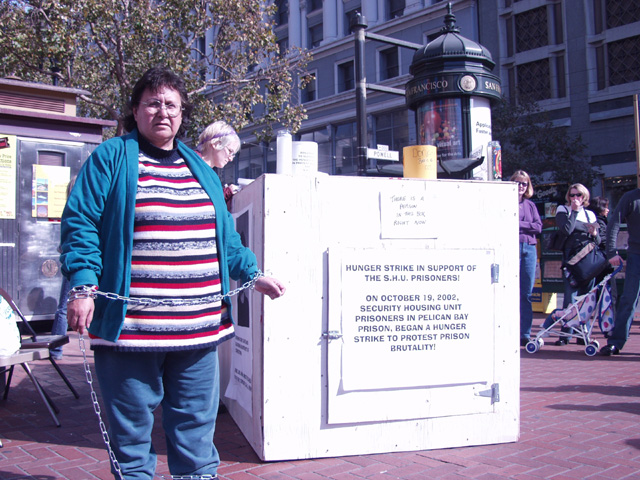 
Candidates for Governor Ignore the Issue of
Torture in the California Prisons
Anti-war Activists Hold Press Conference on the Fifth Day of the Vigil and Hunger Strike in Replica of a Security Housing Unit (S.H.U.) on the Streets of San Francisco

The All People’s Coalition will hold a press conference and rally at 5:30pm at Powell and Market Streets in San Francisco to call attention to the torture inside the California prison system through the Security Housing Unit or S.H.U. programs.
The anti-war coalition has held a hunger strike and vigil since Halloween night in a replica of torture program known as the S.H.U., which exists inside Pelican Bay and Corcoran State Prisons and other institutions throughout the state and country. Activists have taken on 24 hour shifts inside a box to call attention to the human beings stuffed inside these torture chambers. Activists have organized on the outside to make the public aware of how the SHU program is being used to target activists against prison brutality.
States Quetzaoceloacuia, whose community organization the Barrio Defense Committee is part of the anti-war coalition, “The candidates for governor remain chillingly silent about the prison brutality that goes on inside the California prisons. Prison activists like my son, Jose Luis Avina are being brutalized in retaliation for their basic demands for human rights.”
Jose Luis Avina has been in the SHU in Corcoran State Prison since 1999 following a hunger strike that he led with other activists at New Folsom Prison. Avina has acquired arthritis and is slowing going blind at the age of 29.
The All People’s Coalition is calling for an abolishment of the SHU program and has gathered thousands of signatures on the streets of San Francisco showing public opposition. Call (408) 885-9785 for more information or email allpeepsco [at] yahoo.com