Add an Event
Newswire
Calendar
Features
Home
Donate
From the Open-Publishing Calendar
From the Open-Publishing Newswire
Indybay Feature
Related Categories:
Artwork commemorating L.A.'s April 29th Rebellion
by Mark Vallen - ART FOR A CHANGE (vallen [at] art-for-a-change.com)
Monday Apr 29th, 2002 1:55 PM
I created this Artwork based on a street scene I witnessed ten years ago just as the L.A. Riots were beginning. 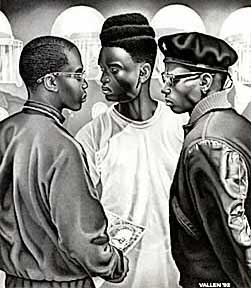 In 1992 I did this Pencil Drawing in the immediate aftermath of the Rodney King verdict and the bloody riots that ensued on April 29th. I had actually witnessed this scene on the streets of Los Angeles during the first day of violence. Thousands of outraged citizens gathered in front of the Los Angeles Police Department headquarters and in the crowd stood these defiant, angry young men, one of them clutching a Flyer with Malcolm X emblazoned upon it. The unflinching militancy of these youth inspired me to create this Artwork, which I've titled, "No Justice, No Peace!" I printed my Pencil Drawing as an Offset mini-Poster, in a run of 5,000. The Artworks were then distributed throughout Los Angeles.