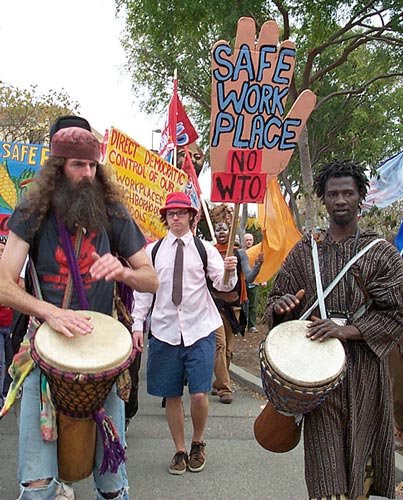 Richmond, California -- Two years after its defeat in Seattle the World Trade Organization is meeting again in Doha, Qatar. In response, people across the globe are localizing their resistance to once again stop the WTO's destructive "free trade" agenda.

In Richmond, hundreds of activists marched two miles from the BART Station to Chevron's Point Richmond oil refinery. Petrochemical giants like Chevron epitomize the corporations that benefit from the WTO and its "free trade" policies, devastating local communities and environments across the globe.

Dana Merryday (left) wants to "end globalization and protect the world for generations to come." Yusuf (right) stated, "As an African, I feel like the American people do - that the WTO is not representing me." He added, "When I go to these protests there should be music...that's what I can contribute." (David Hanks/Global Exchange – Saturday 10 November 2001)
http://www.globalexchange.org
Add Your Comments
Support Independent Media
We are 100% volunteer and depend on your participation to sustain our efforts!