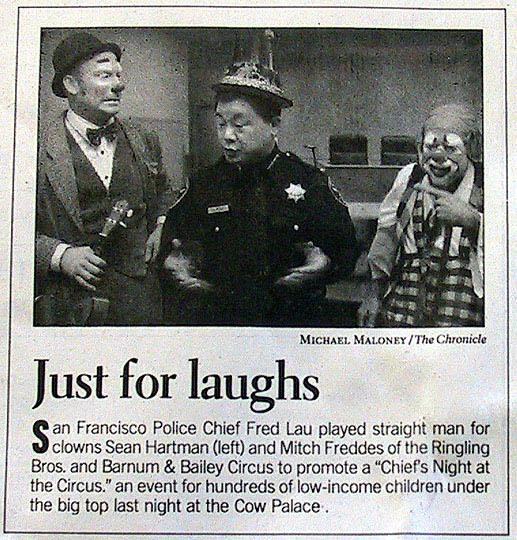 How Sweet! Police Chief Clowns Around For The Poor Kids

(Photo) Police Chief Lau Clowns around for the poor kids.
Oh my word – he’s such a nice man.
I love the SFPD more than ever!
What’s that you say - he’s trying to cover-up an unjustifiable police killing?
Impossible – he put on a clown hat for the poor kids – I don’t believe it.

Believe it.
Chief Lau is willing to put on his clown hat and “help” the poor kids when the SFPD Public Relations Officer tells him to – but won’t help Idriss Stelley’s family and friends get answers to basic questions about his death.
It’s been over two months since Idriss was killed and the SFPD continues to delay the release of names - of the officers involved and of witnesses.

For more information:
http://www.indybay.org/features/police/
Add Your Comments
§Link To Online Color Photo of Chief Clown Lau
by anon
Friday Aug 17th, 2001 1:19 PM
chief clown Lau - color photo on sf chron site:
http://www.sfgate.com/cgi-bin/sfgate/objec...
§Oops - Try This...
by anon
Friday Aug 17th, 2001 2:07 PM
Oops - do the following if you need the color photo for making protest signs or if you love Chief Lau or something...