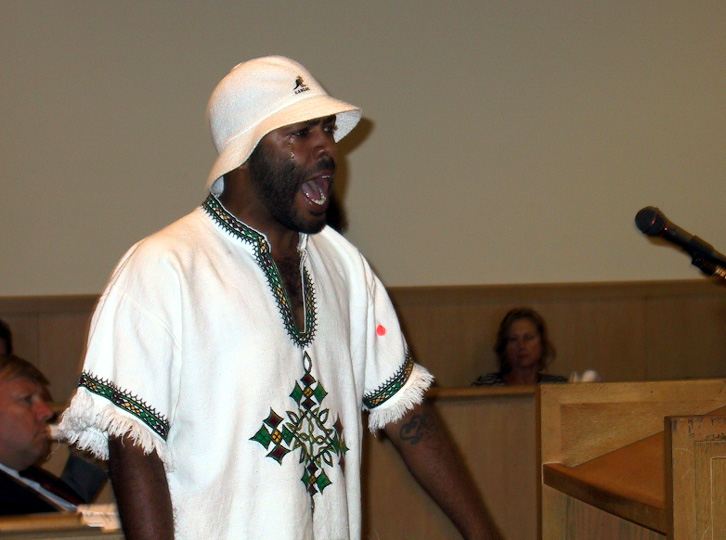 Brutha Los of the Company of Prophets made his point heard and felt in an extremely powerful indictment of the SFPD and the Police Commission. He started by counting off the number of times that Idriss Stelley was shot by the SFPD, hitting the podium with his fist for emphasis. Many others joined in counting-off the shots. It took a long time to get to 27 - a very sobering moment.

Idriss was killed almost two months ago.
The SFPD continues to delay the release of names - of the officers involved and of witnesses to the killing.
Add Your Comments
§Re: SFPD Killings Counting the Shots
by Reese
Thursday Aug 9th, 2001 3:06 PM
"He started by counting off the number of times that Idriss Stelley was shot by the SFPD, hitting the podium with his fist for emphasis. Many others joined in counting-off the shots. It took a long time to get to 27 - a very sobering moment"

I bet it took him about thirty seconds to count... which of course conveys the subliminal impression that for thirty straight seconds the cops shot Idriss Stelley. Clever tactic -- and sneaky too. I don't think the cops should have shot this guy 27 times if at all, but that is a conniving and misleading way to demonstrate your displeasure against it.


Flame away fuckers.
Add a Comment
§My sympathy to the family.
by Anna
Sunday Mar 3rd, 2002 9:34 PM
I'm sorry to hear about the shooting death of Idriss. The sudden and unexpected death of a son or daughter has to be a parent's worse nightmare. Although I don't know much about this particular situation (first heard about it tonight), it does seem that police forces all across the US need to be retrained to handle situations more appropriately than to just shoot someone as if that is the "only solution" to everything the police know.
Add a Comment
Support Independent Media